An unknown quantity until winning Best Industrial Band at this year's Austin Music Awards, Tungsten Coil buzzed around the local electronica/industrial scene until reconfiguring in 2005 with a splashy stage show. No lights and fog here, and without attendant pageantry, Alpha Omega wobbles on its music alone. If TC's industrial clamor isn't nearly as punishing as the Skatenigs, or if their goth-electronica quota isn't as crackling as Lucid Dementia's, Tungsten Coil's classic heavy rock flexes muscle and bone on tracks "Prey to Me" and "Time" and in the dialogue samples from WarGames on "The Light." Eric Oberto's sonorous John Cale/Nick Cave drones give the band its brand, as does a taste of Tangerine Dream synth on the title track, but it's time to caution TC against too many Spinal Tap-like song and album titles and to – once in a while – growl. 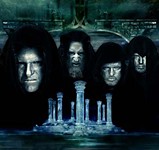