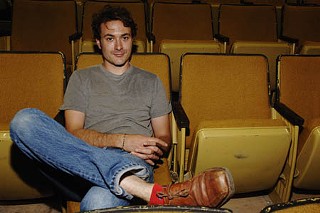 When the original Church of the Friendly Ghost was exorcised from its Eastside neighborhood in 2006, its reappearance at Salvage Vanguard Theater last summer was a spectral promise of good things to come. A year later, what was once a weekly Tuesday night BYOB gig offering peanut-butter-and-jelly sandwiches has now spread to other nights of the week. Hosting everything from the Toneburst series of experimental music to more traditional local psych and rock groups, the Church and SVT offer a perfect center in which the old experimental Austin guard and the younger blood can cohabit. Church founder Aaron Mace puts veteran sound and visual artists Steve Marsh, Josh Ronsen (Brekekekexkoaxkoax), Rick Reed (who organizes the Toneburst series), William Meadows, and Alex Keller in the "near genius" category, alongside newer noise noteworthies like Thomas Fang, Brent Farris, and Carlos Villarreal (Quebron).

"There's definitely been a noticeable flourish in activity, not only because we seek to showcase this stuff but due to the increased activity the Church series affords in general," Mace says. "I think there's a sense of common goals and community that's really bloomed in the course of the last year. The vibe is more lively too, excitable."

As an example of SVT's importance, Mace cites three big shows that might not have had a venue otherwise: Dutch improv wonders the Willem Breuker Kollektief, Japanese percussionist Tatsuya Nakatani, and NYC's the Claudia Quintet. The satellite scene that's popped up at South First's Opera House is another example of the growth in Austin's experimental petri dish. While the appeal of such music in Austin and beyond has traditionally been a limited one, the Church exposes audiences to new sounds and provides a home for kindred spirits to gather.

"What we're concerned with is creative music," Mace relates. "That is to say, musically, what lies between the culture of bar venues and the culture of fine arts in Austin. I want the Church to realize the potential for its role as a community center and as a cultural archive. In the coming year, we hope to get a proper website up, begin recording and podcasting more performances, continue building a volunteer infrastructure, work more closely with other presenters to further common goals, build relationships with music educators to incubate ideas, acquire a grand piano ...

"The list of ambitions could go on until the sun comes up."

See 10 other Unclassifiable Austin Acts for a handful of the many acts floating out of the Church right now, with the artist's own colorful description, in 20 words or less.