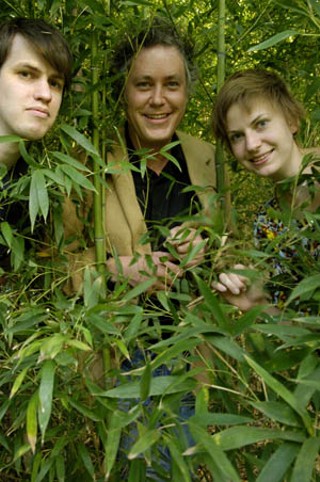 At the Tiniest Bar in Texas, late April, Weird Weeds guitarist Sandy Ewen sits Indian-style stage left; drummer/percussionist Nick Hennies is centered behind the kit, his lanky frame dominating it; and guitarist Aaron Russell sits on a chair with his legs crossed stage right. The local trio forms a line as they strum, scrape, and swirl melodies and harmonies to anticlimax. It's like watching an old roller-coaster car jerk its way up a wooden track before stopping at the top and leaving thrill-seekers white-knuckled.

"I think it's good to have less of an ego in this band," Ewen remarks. "We're not technical or flashy, and no one's really the center of attention. We all have things that we bring, and I don't think it could be any other way."

"We've never sat down and said, 'We want to sound like this,'" Hennies adds. "We each come with parts, and either it works, or it doesn't. There's not a lot of jamming in our band."

"In fact, it never happens," Russell assures. "I'm just really not good at it."

Standing by a Dumpster behind the TBIT after the set, the group tries to explain how the ride works, though this last exchange is a good reflection of their working relationship. The Weird Weeds' music is challenging, yes, an exercise in tension and release, anticipation and fulfillment. Imagine biting into a piece of layer cake, that sensation of your teeth sinking through each texture before the sugar buzz hits. Repetition, stretches of silence, strange soundscapes, and jarring drum-guitar interplay have marked the band's sound since 2004 debut LP Hold Me, which featured second guitarist Kurt Newman, who left after a year.

In the band's configuration as a threepiece, each member brings an individuality that spans generations. Twenty-three-year-old Houston transplant and University of Texas architecture student Ewen plays with Charalambides' Tom Carter in a band called Spiderwebs and has collaborated with Houston's MECA Improv Ensemble, with the nonprofit Multicultural Education and Counseling Through the Arts program. Twenty-eight-year-old Hennies has collaborated with various Austin experimentalists and manned the kit for Jandek's first local gig at the Scottish Rite Theatre in the summer of 2005. Thirty-eight-year-old Russell, who's played in Deerhoof offshoot Theteethe and Nashville's folky Cherry Blossoms, acts as anchor for Hennies and Ewen. Such a makeup does not call for jamming.

As a testament to this unwieldy sound, the group titled its 2006 sophomore album Weird Feelings. It was a close listen, folk-dotted with moments of clarity but still floating above odd time signatures. Guitar wunderkind Ewen, both live and on disc, used a piece of chalk on her guitar to wring out those weird feelings, paired with Hennies' feather-weight drumming. Her design eye makes for an interesting approach to playing. 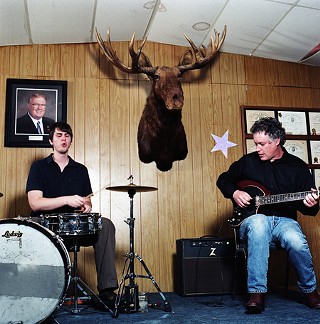 "It's more about sound and texture than melody," offers Ewen. "[The chalk] makes a bigger mess, but it has a purer sound to it. The notes are cleaner. Music needs to work second by second with sound and melodies but also as a larger composition like a song, a set, or an album. Architecture, likewise, is best when the small details, the spatial relation and the relation to site or neighborhood, are each considered thoughtfully. They both have the same goals: to create a space and shape perception."

While Weird Feelings was recorded in literally two hours, the trio went into its latest, I Miss This (SXSW Platters, March 14), with a little less direction and a lot more time. Over seven months, the piecemeal tracking and recording allowed for more creative tweaking, and this time the band did the mixing in the studio instead of at home. In turn, the sound is fuller and grander, and after a few years of touring, all three musicians have matured. Hennies' drumming became more rhythmic and muscled; Russell sang for the first time on the acoustic title track; Ewen found other ways to make sounds in addition to bows, nails, and chalk, the latter of which had become something of a trademark.

As Russell relates, "experimental pop" is an apt description for I Miss This. Melody weaves through the textured snap of "Red" and the heavy epicness of "Lies" and "A Goose." Ewen's guitar is less the unsettling layer; instead, she creates dreamy thought bubbles that appear suddenly, like when she makes her guitar chirp like a bird on "Dream Songs." The Weeds' words tend toward love and isolation, but the lyrics of I Miss This are particularly fixated on otherness. On charming, 1950s-esque opener "You Drive Me Crazy," Hennies and Ewen duet:

You drive me crazy

It's a simple inversion, but one that fits with the Weeds' musical obtuseness. Hennies agrees that they sometimes write love songs, just not the traditional way.

"My lyrics on I Miss This are maybe a little less cryptic than the past two records," he explains. "The subject of love isn't necessarily a girlfriend, spouse, or partner all the time. It's often boring for me to hear music where there's no mystery, where everything is clearly spelled out. For everything we do, we try to make sure that everything is composed in regards to what the song needs, so I try to use lyrics I feel suit the music in some way."

Weird Weeds at Salvage Vanguard, May 7 (Photo by Sandy Carson)

The band also went from California-based label Sounds Are Active to local Autobus for I Miss This and kept it DIY, an ideology strong within the Weeds.

"They have a very nice phrase for it," says Hennies of the label, home to Austin acts Brazos, Sunset, and Sparrow House. "An 'artist-owned record label,' which is a fancy way of saying we pay for our own stuff. It's actually a great setup if you can afford to put out your CD, because all the profits go to the band."

That will help on their upcoming summer tour, which the band is also self-financing. As they spin tour tales of performing for an audience in the singlest of single digits and playing in a freezing, unheated bar in Utah with snotty noses, it's a nice reminder of that do-it-yourself spirit. They admit to sometimes listening to Books on Tape in the van, and it's precisely such geek love the three share that supplies a canvas for the Weird Weeds' innovative sound collage.

As the Dumpster dive suddenly turns to talk of gout, tuberculosis, and other maladies that seem to be returning from the Dark Ages, Hennies relates that one review pegged I Miss This as a "concept album" about love and loss. He adds that a working title was We're Gonna Die.

"What?" asks Russell, snapping out of plague talk.