Glorious Results of a Misspent Youth

Nearly a year after its local release ("Texas Platters," May 4, 2007), Girl in a Coma's debut, Both Before I'm Gone, has landed on Billboard's Heatseekers chart and outsold both Gnarls Barkley and Vampire Weekend upon its addition to iTunes. Of course it helps that the album is backed by Joan Jett, whom the San Antonio-based trio first encountered through Sí TV cable series Jammin in 2006. "The climax of the program was for us to meet someone who could give us helpful advice," recalls singer/guitarist Nina Diaz. "Instead she ended up signing us to Blackheart Records." Following a brief run on the East Coast last year, the Smiths-inspired group recently joined Morrissey for a full European tour. "We didn't know what they were going to think of us, three Hispanic girls from Texas," Diaz says. "We're just glad they didn't boo." Even better, Moz toasted the girls with a bottle of Champagne backstage before their last show in Paris. "It was pretty surreal," Diaz recounts. Settled back home and writing new material, Girl in a Coma makes graves on Saturday at Jovita's. See "Music Listings," for more info.

There's no telling where the exploratory jams of Tia Carrera will lead. After witnessing the local psych trio shatter the decibel limit during its official South by Southwest showcase in March (see "Off the Record," from the Chronicle's Saturday SXSW daily, with the March 14 issue), Small Stone Records, the Motor City headquarters for Honky and Dixie Witch, agreed to issue the group's next full-length. The band is using the label advance to finish construction of its own studio. "It's going to be our Electric Ladyland," declares guitarist Jason Morales, who hopes to begin recording at the facility by July for a 2009 release. Tia Carrera is still riding high from its trip to the recent Roadburn Festival in Tilburg, Holland, where the band played alongside heavyweights like Isis and Boris. "We really turned some heads," Morales says. "We literally ran out of everything we brought over to sell. We want to get back as soon as possible and do a full European tour." In the meantime, Tia Carrera gets experienced this Friday at Emo's with the Roller and Thrones.

The Raconteurs' two-night stand at Stubb's last weekend (see "Live Shots") was filmed for an impending documentary, It Might Get Loud, about guitarists by director Dave Guggenheim (Deadwood). As for the cameras rolling during Someone Still Loves You Boris Yeltsin's Wednesday night set at the Mohawk, that was courtesy of Switchburn.com. Since its July 2007 inception, the local website has filmed 84 acts spread across 37 performances at 10 different Austin venues (and one in Houston) for a total of 222 multi-angle live shoots, ranging from Black Lips to the Black & White Years, that can be streamed for free. "Our numbers are growing every day," says Switchburn partner Jill Sorrels. "As the list of bands we work with grows, so does our traffic." The site's next scheduled shoot takes place at Emo's on Saturday for locals Haunting Oboe Music. "Of course we know who you are," the computer-generated, alien spacecraft bleeped at Kanye West last Wednesday at the Frank Erwin Center. "You're the biggest star in the universe." No one in the 9,000-plus capacity crowd balked at the claim. For nearly two hours, West executed an epic, one-man War of the Worlds, the celestial stage setup and solar flares illuminating his own presence and delivery during "Flashing Lights" and "Stronger." His performance not only eclipsed that of his Glow in the Dark tour openers – Lupe Fiasco, a red-hot N.E.R.D., and Janet Jackson wannabe Rihanna – but possibly every other hip-hop production that has preceded it. The only question now is: What comes next?

Broken Clock Cabaret's Inside a Broken Clock: A Tom Waits Peepshow is still awaiting approval from its storied subject ("Off the Record," Aug. 17, 2007). "We're not necessarily optimistic, but we haven't given up either," informs producer Rick McNulty. "Our biggest problem is that there are a few productions currently out there that imitate him, and we're being lumped in with them." McNulty's RubyRico Productions is turning its interests instead toward the Memphis sound, hosting Stax Nite at the Victory Grill on Saturday, with a soul revue courtesy of Austin's T-Bird & the Breaks. Meanwhile, the Rain Dog himself announced earlier this week that his Glitter and Doom tour will stop at Houston's Jones Hall on June 22, and the Palladium in Dallas the following night. No Austin dates are scheduled. 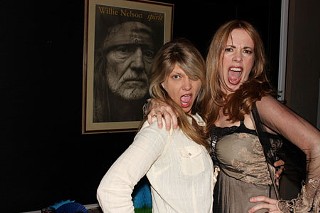 • SoundWave, a nonprofit organization founded and funded by local alt-rock act the Ars Supernova, has partnered with A Glimmer of Hope Foundation and H20 Africa Foundation to finance the construction of a water well in rural Ethiopia. Help support the cause by simply attending the band's show at Stubb's on Friday with Sounds Under Radio. Last Wednesday, as Willie Nelson hit the three-quarters-of-a-century mark while on tour in Europe, fellow Austin artists gathered in KGSR's Music Lounge for a live radio celebration. Highlights from the 4½-hour broadcast included Joe Ely's poignant take of "One Day at a Time," Bobby Whitlock & CoCo Carmel's tender duet "Let It Be Me," and Alejandro Escovedo's "Nickel and a Spoon," on which Nelson originally guested. Patty Griffin stole the show, though, with "Angel Flying Too Close to the Ground," aided by the night's MVP, fiddler Warren Hood. Perhaps the most fitting tributes were the Willie stories swapped on the open bar-fueled patio among family and friends, all of them happy to "stay all night and stay a little longer." Girl in a Coma
1am, Easy Tiger Patio 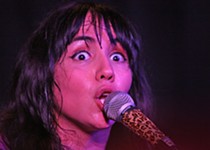