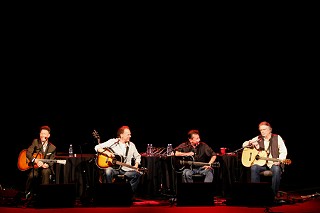 
Two completely sold-out shows. Two nights with the best singer-songwriters the world has to offer. Imagine an ocean of songs with four guitars paddling the way, featuring the gruff patriarch with a tender heart (and unexpected broken leg), the greasy rocker from the flatlands, a Hoosier with a funky side, and the shy, well-dressed Aggie with a crooked smile. Guy Clark, Joe Ely, John Hiatt, and Lyle Lovett have been doing these writer-in-the-round performances since 1989, yet surprisingly, this was their first Austin appearance together. Judging by its success, it won't be their last. While similar in many ways, each night had distinct differences. Monday felt like an event. The audience's anticipation was palpable, down to folks clamoring for tickets that didn't exist at the box office. The foursome didn't disappoint. Clark broke the ice with "L.A. Freeway," but it wasn't until Lovett pretended to interview Hiatt that the night's solemnity loosened up. The second night came off freer, down to a startled Shawn Colvin being pulled out of the audience to join in for the encore. Both shows overflowed with unequaled storytelling, harrowing glimpses of the heart, and more than a few good-natured chuckles. Tuesday's sequence of Ely's audience revving "Me and Billy the Kid," a request for "Seven Little Indians" from Hiatt, Lovett's delicate "South Texas Girl," and the tear-inducing ode to Clark's father, "The Randall Knife" – its author having to leave the stage after singing it – was a daunting display many won't soon forget. Both nights rounded out with the quartet trading verses on Woody Guthrie's "This Land Is Your Land," a nod to the godfather of all singer-songwriters, that scattered some of the Paramount's ghosts and warmly lit the way out to a buzzing Congress Avenue.