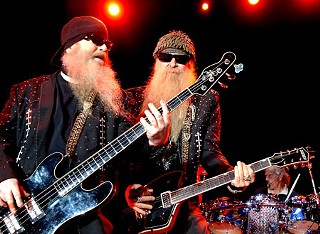 ZZ Top, shown here at the Backyard last year, help round out the venue’s last season May 15. (Photo by Gary Miller)

Last Thursday Direct Events owner Tim O'Connor announced that the Backyard will close following the completion of the venue's 16th season with the Gipsy Kings on Aug. 28. In an official statement, O'Connor cited the development of the Shops at the Galleria as the primary cause of the Backyard's diminished "magic," ironically surrounding the venue with the one thing that it's always lacked: ample parking (see "TCB," May 4, 2007). Direct Events is currently awaiting approval from the city of Bee Cave on supposed plans for a new location that would be protected from similar developmental issues. What the closure will likely mean, at least in the short term, is an increased emphasis on shows at the Austin Music Hall, where patrons have already proven their willingness to shell out high-end ticket prices for artists like Van Morrison and Duran Duran, despite the venue's acoustic issues. O'Connor declined to comment.

• Nothing will ever top witnessing the Rolling Stones paint Zilker Park black, but the new Martin Scorsese-directed Shine a Light: The IMAX Experience has been Chronicle-certified as the next best thing. This Saturday's screening is prefaced with a free tribute performance from the Stone Ravers, beginning at 6pm, in the Lone Star Plaza of the Bob Bullock Texas State History Museum.

• Texas Heritage Music Foundation's public radio series, Whole Lotta Shakin', which documents the rise of rockabilly in the 1950s and is narrated by Austin's Rosie Flores, is one of 35 recipients of the 2007 George Foster Peabody Award. The ceremony is slated for June 16, at New York City's Waldorf-Astoria. All 10 one-hour programs can be streamed at www.rockabillyradio.org.

• Funny how time slips away: When Willie Nelson headlined his first show at the Armadillo World Headquarters in 1972, who opened? The first two readers to e-mail the correct answer to offtherecord@austinchronicle.com score a copy of Joe Nick Patoski's new biography, Willie Nelson: An Epic Life. For a refresher of the era, see an excerpt of Patoski's book, "Cosmic Cowboy Souvenir," Music, April 25.

Prince officially has Grupo Fantasma on speed-dial. Fantasma's JewMex horn section joined the Purple One in California for a week of rehearsals that culminated in a last-minute engagement on The Tonight Show With Jay Leno on Friday and a headlining set at Coachella the following evening. "There were people as far as I could see," recalls trumpeter Gilbert Elorreaga. Consider both occasions to be the unofficial kickoff party for ATX's third annual Latino Music Month, which comes this year with an impressive 20-song soundtrack, The Sound Is Brown, produced by the Austin Latino Music Association and the Austin Convention & Visitors Bureau and spotlighting artists from Ruben Ramos and Alejandro Escovedo to Maneja Beto and Patricia Vonne. The celebration culminates May 31, with the inaugural ¡Pachanga! Latino Music Festival in Waterloo Park, headlined by Grupo Fantasma and the Nortec Collective's Bostich & Fussible, with support from Vallejo, Maneja Beto, Charanga Cakewalk, Girl in a Coma, and Kanko, among others. "There's obviously a little Latino rock movement going on in Austin," says event organizer Alex Vallejo. "It's always been around, but the groups coming to the forefront now are mixing traditional styles with more alternative rock and pop. The exciting thing is going to be hearing all of these bands that are known throughout Texas together on one bill." A complete listing of Latino Music Month events can be found at www.austinlatinomusic.com.

The fate of Hacienda was sealed Dec. 9, 2006, when the Austin- and Boerne-based quartet was a last-minute addition to the Black Keys/Dr. Dog bill at La Zona Rosa, per the request of the Black Keys' guitarist, Dan Auerbach. "No one knew about it," says pianist Abraham Villanueva. "We were pretty much playing only for him." The show ultimately resulted in an invitation for Hacienda – Villanueva brothers Abraham, Rene (bass), and Jaime (drums) and their cousin Dante Schwebel (guitar) – to record at Auerbach's home studio in Akron, Ohio, last summer and again in February. "The city is similar to Boerne in that it's a quiet, small town where everything closes at 5," recalls Rene. "We pretty much stayed at Dan's place the whole time with his family. We played everything live in the studio, but Dan wasn't afraid to stop us or step in with ideas." In fact, Auerbach lays down some Thickfreakness on opener"She's Got a Hold on Me," while members of Dr. Dog even flew in for the first session, adding off-kilter harmonies on tunes like "Angela" and "Little Girl." The end result, Here Today, is a 15-song collection of pastoral pop and Rubber Soul. Hacienda is now in talks with its collaborators' respective labels, Fat Possum and Park the Van Records, about a possible national release and hits the United States Arts Authority on Friday with the Strange Boys and Gospel Truth.

While most people under 30 are more familiar with 90210 than Yes' 90125, 18-year-old Austinite Geena Spigarelli recently backed the band's frontman, Jon Anderson, for a four-date tour of California with her fellow All-Stars from the Paul Green School of Rock Music. "I definitely studied up before I left," says Spigarelli, who's been enrolled in the local branch of the program since September 2005 and graduates this year. "He hasn't lost his ability to hit the high notes. He definitely still has his A-game." Expect Spigarelli to reunite with Anderson in August, when the Austin School of Rock opens for Yes in Houston and Dallas. In the meantime, the institution's end-of-semester showcases begin this Friday with a two-night homage to punk rock at Emo's Lounge, followed by tributes to Aerosmith and Texas rock on successive weekends at Ruta Maya and Rock City Icehouse, respectively.