Ruins of the Realm 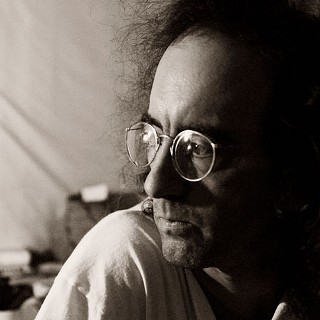 Spring turkey-hunting in North Texas takes patience and skill. As the gobblers come into breeding season, the notoriously shy birds preen and strut with the hopes of getting a little loving. In the low light around the edges of the day, hens emerge to check on the mature toms making all the noise. A wrong step, a snapped branch, or a sneeze can send the colorful, cautious birds fluttering away. Hunting magazines come filled with tips about turkey behavior, calls to use, how to assess habitats, and the best ammo for success. Even then, no matter the hunter's talents, there will always be missed opportunities.

The same holds true for musicians looking to make it. Talent and hard work cannot account for the ever-changing zeitgeist in pop culture any more than scouting and a shotgun can make up for a shift in the wind or wildlife fleeing the presence of a predator. Not that anybody needs to remind veteran Austin-based musician James McMurtry about the parallels between hunting and a career in music.

Following McMurtry's lauded 1989 debut on Columbia Records, Too Long in the Wasteland, which was produced by John Mellencamp, he's received critical raves, but a broader audience has continued to elude him until recently. His 2005 release, Childish Things, was his bestselling album in a decade. This month's follow-up, Just Us Kids ("Texas Platters," April 11), arrives piled high with praise and talk that it should earn McMurtry, if not commercial success, at least a modicum of recognition. On the eve of a national tour, McMurtry agrees to a bite at Enoteca, a trendy Italian bistro a few doors down Congress Avenue from the Continental Club, where he's held down a Wednesday night residency for years.

Having just returned from a hunting trip on his grandfather's ranch outside of Fort Worth, the city where he was born, McMurtry rues missing his chance to bring home a turkey. With his ninth album, he's trying to warm up to some of the demands of the music business, including press encounters, but he still keeps his jaw clenched when talking.

"I meant to title it Ruins of the Realm," says McMurtry, his beard flecked with gray and his signature fedora screwed down over his longish hair. "And I told people that's what I was going to title it, but they just said they couldn't get their head around it. So, it was like, maybe I'll title it Just Us Kids."

The title track, which arrives in the disc's second spot, is several years old, but McMurtry explains he had to rework the chord progressions before recording it. The song arcs from the narrator's adolescence through middle age, reminiscing on small-town dreams gone awry and the white-collar malaise that sometimes follows: "It's a damn short movie, how did we ever get here? Not so skinny, not so free, not so many as we used to be."

For McMurtry, "How did we ever get here?" isn't merely a question asked by the indelible characters that inhabit his best songs but also a political inquest. Just Us Kids traces the struggles faced by everyday people, while McMurtry drew added creative energy from his disgust with the policies of the Bush administration. He takes Bush directly to task with the pungent, if somewhat ham-handed, poetry of "Cheney's Toy," painting the Iraq war as folly beyond compare with his thumbnail portraits of tortured prisoners and injured soldiers. Despite his efforts to make the message crystal clear, the author says he's been challenged by listeners who think the song addresses the troops as opposed to the president.

"A lot of people seem to think that," he admits. "I thought I put enough clues in there. Bush thinks he's the president, but he's Cheney's toy in my opinion. The whole point of 'You're the man' – I don't know where I read that; I think it was The New York Times – is that's what Cheney tells Bush so he'll go out there and act like the president. 'You're the man,' you know: Stay the course, bring 'em on – all that stuff.

"So yeah, the whole song's directed at Bush."

It goes without saying that McMurtry doesn't mind stirring a little controversy. In 2005, he was a regular fixture at Camp Casey in Crawford, Texas, where peace activist Cindy Sheehan sought to engage President Bush on his home turf. More recently, McMurtry's written for political website The Huffington Post about his mistrust of the "euphoria" surrounding Barack Obama's presidential bid, while expressing qualified support for Hillary Clinton.

At the Continental Club, during the first night of the release party for Just Us Kids, April 15 – that's tax day, in case you missed it – he offered a biting version of "We Can't Make It Here," a long track off Childish Things that won the admiration of Stephen King, one of the few 20th century novelists who has outsold McMurtry's father, Larry, of Lonesome Dove fame. While a small crowd boogied to the rocking beat, McMurtry spat unblinking lyrics:

"Will work for food, will die for oil, will kill for power and to us the spoils. The billionaires get to pay less tax, the working poor get to fall through the cracks. Let 'em eat jellybeans, let 'em eat cake. Let 'em eat shit, whatever it takes."

"I just hope he gets heard more and more," says British rock legend Ian McLagan, who helped out on keyboards on Just Us Kids. McLagan made his name with the Faces and backed the Rolling Stones before settling in Austin. He hooked up with McMurtry thanks to drummer Darren Hess, who used to play with McLagan's close friend and former bandmate the late Ronnie Lane. Hess, along with bassist Ronnie Johnson, backs McMurtry in the Heartless Bastards. "They're not heartless, of course," laughs McLagan. "When James writes songs, he speaks for himself, but he also speaks for a lot of people. He speaks for the common man. You're not going to get that with Justin Timberlake."

Don't mistake McMurtry for some 1960s-minded folky, however. He plays a mean electric guitar and remains deadly serious about the craftsmanship that goes into making an album, as well as how to re-create the strum and drang of a full band when the threepiece Heartless Bastards take the stage. (During recent shows, Tim Holt has joined the band as a second guitarist.) Just Us Kids is the fourth album in a row that McMurtry produced himself. In addition to McLagan, guests include guitarist Jon Dee Graham and Pat MacDonald of Timbuk 3, while the swamp-boogie opener "Bayou Tortous" features his 17-year-old son, Curtis McMurtry, playing baritone sax.

"Basically, what you're doing when you're producing is you're painting with sound," says McMurtry. "You give yourself a sonic palette to use. Once we get the record done, we have to figure out how we're going to play this live. You know, if you've got five guitar parts on the song, I'm not going to carry five guitars on the road. So when we decide we've got to get the essence of it as a threepiece or a fourpiece, it can turn into a totally different thing."

Yet at his CD release, it isn't the rootsy vamps or the talking blues that McMurtry performs so well that seize the crowd by the throat. Rather, he stands alone with an acoustic guitar for "Ruby and Carlos," a new song of damaged lovers, and it's there the hunter draws the audience in like a fat tom turkey. Talk ceases, and all eyes turn to McMurtry as he quavers the bull's-eye finale: "Holding back the flood, just don't do no good. You just can't unclench your teeth to howl the way you should. So you curl your lips around the taste of tears and the hollow sound that no one owns but you."

These are words sung with McMurtry's mouth wide open.

Top 5 Songs That at Least Touch on Relevant Issues

1) 9/11/01: Bush sits stiffly in front of a class of schoolchildren for seven minutes while people jump to their deaths from the burning towers.