The Black Keys' Nonesuch debut, 2006's Magic Potion, sounded a bit diluted and formulaic. Enter Brian Burton, better known as Danger Mouse, the beat scientist behind Gnarls Barkley, whose shape-shifting production – from the swelling organ of moody opener "All You Ever Wanted" to the backward guitar in the heavy blues of "I Got Mine" – results in the Akron, Ohio, duo's most diverse and subtly psychedelic work to date (just check the flute solo on "Same Old Thing"). Originally conceived as a collaboration to include the late Ike Turner, Attack and Release retains the anguished soul and ghostly chill of its inspiration, particularly in "Lies" and the banjo-laced "Psychotic Girl," while "Oceans and Streams" sways like Junior Kimbrough's Chulahoma. Burton's masterful production proves most evident on "Remember When (Side A)," which slows the classic Thickfreakness of its B-side counterpart to half-speed and treats it with eerie, haunted-house effects. All the Keys needed was a bit of black magic. 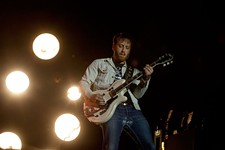