Last of a Breed 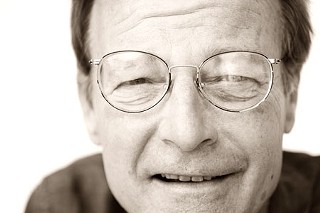 It may not be Willie World, but author Joe Nick Patoski has leveraged his own slice of Texas heaven just beyond the banks of the Blanco River outside of Wimberley. Former contributing editor to Texas Monthly and biographer of tragic Lone Star music legends Selena and Stevie Ray Vaughan, Patoski delves into a character with a little more life to him in his latest book: Willie Nelson.

"He's the most important Texan of the 20th and 21st century," says Patoski, who first interviewed Nelson in 1973. "That's why I've written this book."

Not particularly tall, Patoski possesses an impish smile and a lithe build honed by years of swimming in that nearby river.

"Whatever you want to project on him, more often than not, he's that thing," Patoski continues. "You can say he's your favorite weed-head. And, oh yeah, he is that, and Willie doesn't mind saying he's part of [the National Organization for the Reform of Marijuana Laws]. He's also friend to the family farmer. So yeah, he's that. He's a country traditionalist. Yeah, he's that. But he's completely outside the box."

With thin lips and a friendly manner, Patoski's slight physique recalls the figure cut by William "Willie" Hugh Nelson, born 1933 in Abbott, Texas, a small community just north of Waco. Patoski's rambling Hill Country home sits on a small rise surrounded by oak and prickly pear, an enormous barbecue pit worthy of television's Lone Star paterfamilias Hank Hill set right off the walk to the front door. He and his wife, Kris, have moved the washer and drier out of the back room to create for him a modest, makeshift office, sparsely decorated but well-stocked with shelf upon shelf of CDs and boxes of books, including a crate of his new biography of Nelson, titled simply enough Willie Nelson: An Epic Life.

"I was going for a lot of context," says Patoski. "I can't get inside his head – he's already done that; he wrote his autobiography. There was a need for a little distance. The distance let me make him a little more of a character."

At 56, Patoski's a few years younger than his subject, who turns 75 this month, but he's old enough to have been through the wringer a time or two. He's managed bands, including Joe King Carrasco, whose artwork decorates his living room; critiqued for the local daily; covered environmental issues for The Texas Observer; been a stringer for Rolling Stone; profiled many musicians for No Depression; and supplied text for photographer Laurence Parent's breathtaking books on Big Bend and the Texas Coast published by the University of Texas Press. Weighing in at more than 500 pages, An Epic Life arrives just in time for the round of celebrations that will accompany Nelson's birthday at the end of April.

Written with the cooperation of Willie's friends and family, the book remains unauthorized, meaning its subject had no control over which incidents were included or how he's portrayed. Patoski also penned the notes accompanying Sony Legacy's new Nelson box set, One Hell of a Ride ("Phases & Stages," April 4), another effort to bottle the country music maverick's genius and secure his place in pop.

Patoski found his entrée into music criticism when he decamped from his parent's home in Fort Worth and found a job at the Minneapolis equivalent to Waterloo Records, the Electric Fetus. As the cosmic cowboy era dawned, Patoski found encouragement from critical godhead Lester Bangs at the now-defunct music magazine Creem. Nelson had just released Yesterday's Wine, while Doug Sahm had already introduced a generation of Texans to flower power with his outfit the Sir Douglas Quartet. Patoski first drew a bead on Nelson during his childhood in Fort Worth, where his parents moved when he was 2. Nelson was a familiar fixture from the Panther Hall broadcasts of The Ernest Tubb Show.

"I had been a Doug head already. He was the first hippie who dressed as a cowboy," Patoski remembers. "But I knew Willie by osmosis, because in 1961, 'Hello Walls' was as much a Top 40 hit as it was a country hit. Every two weeks, it seemed like, Willie was coming down. I didn't know he was up in Nashville, but his money was being made in Texas, and he was getting played on Texas country radio. Then, in Minneapolis, someone turned me on to Yesterday's Wine, and man, it was deep. You could tell something was going on."

In a biographical setup that presages Nelson's arrival in Austin, Patoski writes: "It wasn't just that Yesterday's Wine was too weird for RCA. 'Willie was way too weird for Chet [Atkins, the producer],' observed Cowboy Jack Clement. ... Chet Atkins had kept country music alive when rock & roll took over the sales bins. The Nashville Sound he helped create kept churning out product with enough hits to justify his position. But there was no way he was going to have hits on all the acts he produced and Willie was proof."

In short order, Nelson was "Gone to Texas," as was Patoski, who was done with the Minnesota winters. By then, he'd caught the Allman Brothers Band shortly before guitarist Duane Allman's death and was well-primed for the conflagration of honky-tonk and Southern rock that sent Nelson's career into international orbit. Patoski attended shows at the Soap Creek Saloon, Armadillo World Headquarters, and the Austin Opry House, but it's to the author's credit that he resists inserting himself into the middle of the story.

Not that Patoski didn't sample the same strange stew that fortified and attracted songwriters such as erstwhile gubernatorial candidate Kinky Friedman, Kris Kristofferson, Waylon Jennings, and Bob Dylan – who remains unknowable in Patoski's account – a mixture seasoned with pills and powders, mushrooms, marijuana, and not a little bit of Lone Star Beer.

"Willie had such a history before then," says Patoski. "You could stop his recording history at '72, and it's still fascinating. But unlike the San Francisco sound, the sound that blew up in Austin in the 1970s is still playing out today."

And thus, a peculiar twinned history began as the Red Headed Stranger emerged from his Nashville exile to become an iconic figure on the American landscape. Patoski, in turn, first tracked down Nelson for a third-rate music magazine called Zoo World.

"I would write for anybody," he says.

The epic story that's emerged 35 years later, however, isn't derived from said icon spilling his guts. Rather it's reporting born of decades of newspaper and magazine work, Patoski consulting library records to see where the family started and where Willie's itinerant mother and ne'er-do-well father ended up. Speaking with sister Bobbie, best friend Paul English, and a host of other musicians, Patoski goes both long and deep in his coverage of his topic's musical career. Some may complain, in fact, that for an unauthorized biography, private dirt is in short supply. The author reasons that if a topic didn't apply to Nelson's music, he left it alone for someone else to exhume.

"All I'm trying to do is lay down a marker," Patoski explains. "When we go back to the Seventies and Eighties, and I talk about it a little bit, it was beyond wild – and I wasn't privy to all the wildness. I allude to it enough, and I talk about it enough. It was crazy. I hope the people around him take the time to do their own books, because they've got insight I'll never have."