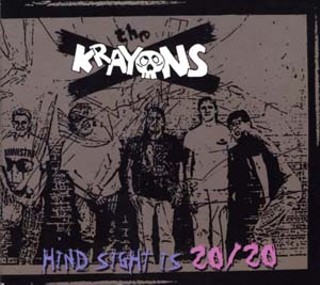 
Emerging from the south side of Corpus Christi in 1987, the Krayons plied gravelly, Dischord-influenced hardcore for eight years before hanging it up in 1995. Released in conjunction with their recent Room 710 reunion gig, Hind Sight compiles the Krayons' vinyl and cassette output on CD for the first time. These 24 tracks hint at the sweat-soaked immediacy of an all-ages warehouse show in Anytown, USA, but it's difficult to discern what distinguished this band from thousands of others that followed the same trajectory. Therein lies the rub with the era's oft-militant conventions and preclusion toward overwrought polemics. Would-be outcast anthems like "Utopia?," "4 A.M. Drunks," and "Alone in a Crowded Room" resonate postadolescent fury, but yapped vocals, plodding drums, and prowess outpaced by ambition conspire to sap the music's shelf life. In a genre that doesn't lend itself to easy nostalgia, sometimes you just had to be there.