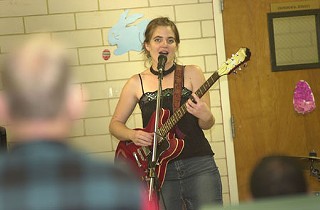 Evening at the Hospital: Suzanna Choffel (Photo by John Anderson)

It's 6:30pm on a Sunday night in January, and patients from the Adult Psychiatric Services unit begin to file into the hall and sit down in folding chairs.

Allison Thrash, a petite brunette wearing white cowboy boots and a 1,000-watt smile, welcomes the assembling crowd of roughly two dozen with a few more cheery pleasantries before abruptly tearing into some sassy roadhouse blues. Slowly, patients get up and dance, alone and with partners. The ones shaking it solo aren't self-conscious about it; one young woman in an animal-print sweater shimmies and snaps her fingers as if she were in West Side Story.

As the show progresses, an older black man with salt-and-pepper hair sits in on a song, revealing his striking voice. A short Hispanic gentleman waves an American flag, cloaks it around him like a cape, and starts reciting a slightly revisionist rendition of the national anthem. Several men stand up and take off their hats.

"Rolling Stones!" a man with flowing white hair calls out up front.

A young woman requests "Will the Circle Be Unbroken," at first too shy to sing it herself. Then, at the urging of her baby-faced dance partner, she picks up the microphone and delivers a beautiful version of the Carter Family standard.

"I sang that song at my grandparents' funeral," she says.

This scene from the Austin State Hospital isn't quite as One Flew Over the Cuckoo's Nest as you might think. Barbara Kelly, director of community relations at ASH, coordinates a live music performance once a month, integrating Austin's abundant music scene into the hospital and, in return, offering patients a therapeutic diversion.

When Kelly arrived at ASH in 2005, there was already a program, Sparks of Life, created by Volunteer Services Council board member Roseanne Singer.

"She visited a program in New York City that brought music from the community into the hospital," explains Kelly. "The program was conceived as a volunteer program, so there was resistance to paying [musicians] a stipend."

Kelly met up with local booker and musician Paul Minor, who agreed they would have difficulty selling the idea to local acts without financial recompense. "I agreed with him, as many musicians in Austin have a hard time making ends meet," she nods.

Hired full time in 2006, Kelly talked with the SIMS Foundation more about bringing music to ASH. Summer 2007, she was granted funds for the program, allowing for monthly shows in each service area: Adult, Children and Adolescent, and Specialty. Since late last year, her connections have landed much local talent at ASH: Oliver Rajamani, the Summer Wardrobe, That Damned Band, Single Frame, Done Deal, and an appearance during South by Southwest from Seattle's Two Loons for Tea. She's careful to tailor artists to the different wards. 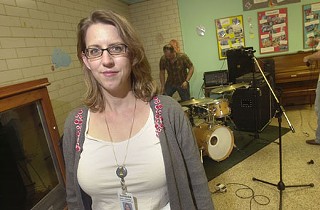 Trish Reis and Michael Marcionetti are music therapists at ASH and musicians. Reis plays in Poor Yorick, and Marcionetti currently drums in Samba School. Both know the personal and professional sides of music as therapy. Though what they offer is more personalized for the issues of the individual patient (lyric analysis, songwriting, etc.), they see the music series as a viable and beneficial extension.

"With all the therapy they get at the hospital, the series allows a venue where they can go and socialize with each other," says Reis. "With a lot of our patients, they don't know how to have good leisure time, so [the series] is a place to meet, dance, talk.

"And the musicians feel good about it, too."

"You'll never find a more appreciative audience," Marcionetti adds. "There's a stigma attached to mental illness, but it can affect anyone, so for the musicians who come here – we have a name for it in the drumming world, 'rhythm tithing' – it's giving back."

And what of the historical link between creative types and mental illness? Marcionetti relates the story of an "extremely psychotic" patient who was also a great guitarist.

"He told me, 'The only time the voices leave me alone is when I'm playing that guitar.'"

It's late March at the Specialty Adult Services unit, and Suzanna Choffel and her twopiece band – scaled down to just drummer Eldridge Goins and bassist Johnny Vogelsang – are setting up on a Thursday night. Whereas Adult Services treats patients with issues like depression, patients here have more severe cognitive disabilities such as brain injuries or are elderly patients with afflictions like schizophrenia.

As the band begins playing, many just sit and watch. A guy in the back taps out imaginary keys in the air during one song; another fellow in a red bandana throws jabs into the air like he's boxing to the beat. A short man in fingerless gloves and a muscle T wheels his walker over to Barbara Kelly and offers an unsolicited tutorial on music and composition, at one point stating, "Rap, well that's crap!"

"This song's about stumbling into something bad and getting back up again," Choffel says, the irony of her words lingering.

There's something else being communicated here as well. Last year, Columbia University neurology professor Oliver Sacks published Musicophilia: Tales of Music and the Brain, a fascinating and curious collection of case studies ("Rock & Roll Books," Nov. 30, 2007). In it, a chapter on music therapy and patients with Parkinson's disease explains how playing music for patients, or letting them play an instrument like piano, allowed many in the study to move less rigidly, more naturally. Sacks also cites Nietzsche's interest in music and physiology and how he spoke of its "tonic effect." Memories of music may be recalled, melodies remembered, minds and bodies mobilized. As seen on this night, Nietzsche was pretty close.

"It normalizes them," Kelly agrees. "It brings them out of their isolation. They're connecting with something. They can express themselves. Music's nonverbal."

Interaction is the word that keeps coming up, Kelly remembering a woman with bipolar disorder who said she'd never danced before a performance at ASH and the extremely withdrawn child who started doing backflips during a set by local hip-hop group Done Deal. With that in mind, Kelly hopes to attract more locals to perform at the hospital, eventually more than once a month.

It's Choffel's first time playing ASH, and at first she looks a little nervous, but she straightens up and subtly charms the crowd. Her trio offers up a cover of "Ring of Fire," but there are still eager calls for "Elvis!" and "Clapton! Do you know Clapton?" When Choffel and company are finished, a few patients come up and shake their hands, telling them, "Great, just great."

"There's no inhibition," Choffel remarks afterward. "It's random people reacting to the sounds ... and it's obviously a lot different than playing in a club. Here, you can see so much going on in their heads." 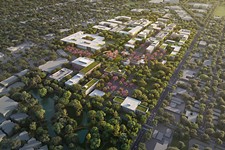 Envisioning the Future of Austin State Hospital
What will it take to turn the former Texas State Lunatic Hospital into a world-class center of brain health? 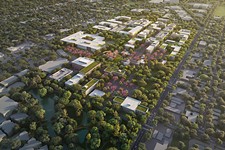