The Lonesome Heroes rewrite the rules of alt.country, Wednesday nights at the Hole in the Wall 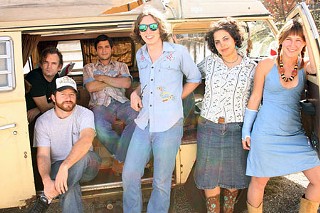 Wednesday night, and the Hole in the Wall is packed to the back. Again. The crowd presses against the jukebox and cigarette machine, allowing a feeble path to the bar. Onstage, Friends of Dean Martinez sweep the room with its atmospheric, dusty Southwestern instrumentals, almost in defiance of what a country bar-band should be.

This is alt.country night, and Rich Russell and Landry McMeans are its consummate hosts. Russell's shoulder-length blond hair bobs and winds through the audience as he greets other artists and Wednesday regulars around the room and kneels in front of the stage to check the sound. McMeans also weaves her way among the chairs and bodies in her familiar denim jacket and skirt, silver tip-bucket hoisted above her short braids. In between sets, the pair plays emcee, announcing each band with a manager's promotional vigor before closing out the night onstage as the Lonesome Heroes.

Since taking up residency at the Hole in the Wall last September, the Lonesome Heroes' alt.country nights have become one of the most popular weekly events in Austin. As a genre, alt.country hardly begins to characterize the eclectic lineups that Russell and McMeans put together, where the experimental textures of Friends of Dean Martinez fit in as easily as the insurgent attitude of American Graveyard, hellbent bluegrass of the Electric Mountain Rotten Apple Gang, or the honky-tonk swing of Doug Warriner. All musical directions ultimately converge in the Lonesome Heroes' easy psychedelic twang.

The Wednesday bills draw crowds mixing Mohawk punks and country kickers, as well as some of the town's top musicians and producers. Behind Russell and McMeans' infectious energy and their intent on building a collaborative environment, it's a scene that recalls the days of Doug Sahm holding court at the Soap Creek Saloon.

"Something about it feels like old Austin," attests Li'l Cap'n Travis' Gary Newcomb, a regular at the showcases even when he's not playing with his own trio. "There's a certain coziness, especially at the Hole in the Wall, that hasn't been around in a long time. We all see how Austin has changed so much, and you can't really go back or anything, but man, they have really made it old and new at the same time."

As local artists and venues struggle to survive in the face of Downtown development and local musical saturation, the Lonesome Heroes have taken an alternative route to the usual new acts scrounging for bookings in the increasingly coagulating circuit of opening slots. Culling talent with a similarly broad country aesthetic and ambition for a different approach, Russell created his own lineups and shopped the entire bill to venues rather than trying to place only his own band.

"Musicians need to take a more active role," offers Russell. "That's why I did this, because all of us together know the problem: Clubs and bookers are trying to get us to bring as many people as we can every time we play so that they can take all the business and then say, 'Don't play a week before or a week after.'

"I've seen so many bands get the cool slot at the big club and then not play for like a month. They end up only playing eight shows a year or something."

The popularity of the Lonesome Heroes' showcases has Russell already booking shows three months in advance, rotating regular bands while ensuring that new ones have an opportunity as well. Yet even as these Wednesday nights maintain their informal impetus, they've helped spur a new generation of artists already making a musical impact.

Sitting outside of the Superpop! Records studio in Hyde Park, Landry McMeans holds her cast-plastered arm to her chest. She broke her wrist a week earlier skateboarding along South Congress. The doctor has left her fingers free, however, allowing her to still play Dobro and for the Heroes to continue recording Crooked Highway, official follow-up to 2006 debut EP Don't Play to Lose.

The Lonesome Heroes has always been a loose affiliation around the core of Russell and McMeans, though the duo has slowly solidified into a steady sextet, with bass traded between American Graveyard's Jim DeGregorio and Li'l Cap'n Travis' Jeff Johnston. Sarah Millenary cuts the tunes with country fiddle, while ubiquitous multi-instrumentalist Kullen Fuchs expands the Heroes' sound with more experimental textures. Ultimately, though, it's the harmonies between Russell and McMeans that define the band, the latter's ethereal Texas twang lilting against the former's more clipped, driving style as they swap lead vocal duties, both drawn over steel and acoustic arrangements that bend expansively behind their restless highway ballads.

McMeans and Russell are an excitable couple. They laugh back and forth in the same laid-back but enthusiastic style that they display onstage, joking and talking over each other as they pick up the threads of a story.

"I think it comes from my own stupidity of not really understanding what alt.country was," laughs Russell at dubbing his shows with the often maligned genre. "I grew up in Brooklyn and moved here because I wanted to play country music, but my conception of country music was all messed up. I like Beck and the Flaming Lips and thought they sounded country!"

After graduating from UC-Santa Cruz in 2002, Russell traveled the country in his Volkswagen bus, which now boasts well over 400,000 miles. He spent time in Colorado and Mexico but, looking for a more musical community, eventually wandered to Austin, summer 2004. 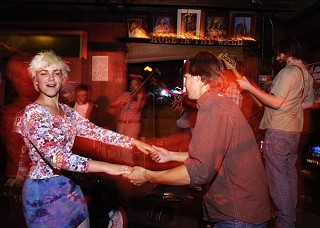 What Russell may have lacked in his aspiring country music background, McMeans more than made up for. She was born in Austin, and her family moved throughout Texas during her youth. Mother taught her to play guitar and sing, and music became both her connection to others and her consolation upon frequent relocations. Music soon lured McMeans to Austin, after spending time at Texas State University in San Marcos.

Representative of the pair's desire to foster a supportive musical community, Russell and McMeans met through the fledging experiment of the Austin Music Co-op. The renovated retirement home on Guadalupe and Nelray provided musicians with affordable, communal housing while also fostering a creative atmosphere. The project imploded after little more than a year.

"Twenty-five musicians living together sounds like a great idea, but it's not!" exclaims McMeans, while Russell adds: "This wasn't like a college hippie co-op. This was all older people who were not used to cooperating, all anarchist punk rockers not really into having some kind of consensus-based voting."

As the two songwriters combined their talents into the Lonesome Heroes, they brought together their favorite local bands into a more cooperative network, as much out of desire to play with them as to create complementary lineups. Fall 2006 found Red River hole in the wall Headhunters agreeing to let Russell start booking Wednesday shows, the hardcore hangout becoming an improbable setting for alt.country nights.

As the shows gathered a regular following, Russell convinced the Hole in the Wall to provide a venue more open to the local music traditions that it drew from. Even as the iconic Drag-bound dive bar has changed management and ownership over the past years, the overwhelming success of the Lonesome Heroes showcases has secured the weekly setup.

"Going to college in Santa Cruz, there was such a great indie rock, DIY house concert scene that didn't play clubs," says Russell. "I thought that's what we need here, getting bands to coordinate. And it's definitely feeling like there's a different consciousness toward the music around here these days, just like the Mohawk is definitely creating their own community and scene."

"I really believe two things: that Texas music and indie rock both have to die."

At a table on the back patio of the Hole in the Wall, Randy "Leatherbag" Reynolds lights another cigarette with nervous intensity. His lanky frame and thick, black-rimmed glasses mark a resemblance to a young Elvis Costello, a comparison that fits Leatherbag's continually shifting musical style equally well.

"How is Texas music going to change?" he continues rhetorically. "It's going to take a bunch of young people like ourselves to move it. Doug Sahm is the perfect example of someone who moved Texas music to a wildly different place. Then there's the young dude that just comes and kicks the door down, like Stevie Earle back in the day: 'Fuck y'all, I'm going to make some rock & roll music and do this right!'"

"My big thing is somebody's gotta take down Robert Earle Keen, and I'm gonna do it. Fuck the backwards cap bullshit."

Reynolds' invective is as calculated as it is sincere. As an alumnus of the Lonesome Heroes' first alt.country shows at Headhunters, Reynolds encapsulates both the diversity of the lineups and cull of genre-crossing musical traditions. His sense of urgency and insistence that contemporary music needs to explore new territory is also indicative of the spirit of both possibility and responsibility that the scene has inspired among younger artists.

"I feel like this is becoming a culture; this is becoming a scene similar to the folk scene in the early Sixties," offers Chris Brecht, another member of the showcases' original bill. "If Austin was New York, 1960, this is probably the Gaslight. It hasn't quite broken, but it's on the brink of a scene, of an alt.country culture going on. The same people are showing up, the same groups of musicians, and those that aren't playing are coming back to watch what's going on the next Wednesday."

"Having watched what they've done over the years, this is really an under the radar scene," agrees singer-songwriter Aimee Bobruk, another alt.country alum. "Instead of worrying about how to get a good slot at the Saxon Pub on Friday night, they're creating this night here where you put [this type of talent] all together and people are going to show up."

Veteran musicians and longtime local insiders are also taking notice. Russell and McMeans' genuineness and charisma nurture the community alongside the music.

"It really seems like the next generation," says Lucky Stripes frontman Craig Marshall. "The more you have all these people in one place working together, that's where the creativity starts becoming contagious. You're building a growing creative environment, and who knows what might spring from that."

In that curiosity of what might emerge and willingness to experiment lies a somewhat inadvertent reclamation and rejuvenation of the original alt.country ethos of the early 1990s. While the genre has generally stagnated into rehashed country rock, Wednesday nights at the Hole in the Wall distill the sound of alt.country progenitors while pushing boundaries that draw from new influences.

"It's American music," declares Reynolds of the showcases. "It's a perfect example of how the music has grown, how it's changed, and how it's going to continue to move. This is a great testament to that. Some of the people that walk through here are the next solution." 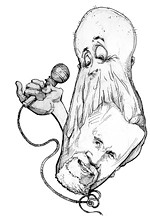