A prostitute-turned-pop-star exposes her Austin roots; Voxtrot readies for round two; and Rock City Icehouse goes to 11

For Those About to Rock 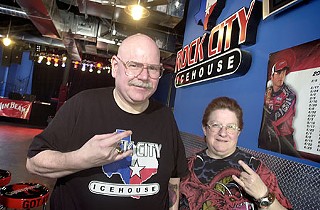 Now that South by Southwest 08 has officially come to pass, OTR can finally enjoy that other March Madness. Enter Rock City Icehouse, a new venue and sports bar located in the Lincoln Village complex near the Monarch Event Center. With 16 flat-screen TVs, a pool table, and a green room, the establishment evokes Austin's sorely missed Back Room, only without the bullet holes and Black Label Society vibes. "We're not trying to replace it, but if it were still open, we wouldn't be here," acknowledges co-owner/co-booker Eleanor McGruff. Since opening on Feb. 2, the venue has already hosted hair metal hangovers L.A. Guns and Skid Row and is quickly becoming a haven for less-established artists. "We got tired of seeing our favorite bands in venues that didn't have adequate sound or lighting," says McGruff, a branded booster of Broken Teeth, who crash the club on Friday. "The most difficult part is getting people used to coming here, but we already have a few regulars."

With only a handful of demos to its name, Austin's Electric Touch has managed to score a deal with Justice Records and a slot at the coveted Coachella Valley Music & Arts Festival in April. "There's no one from Willie Nelson's extended family in our band, if that's what you're wondering," says bassist and vocalist Shane Lawlor in regard to their label's roster, which reads a lot like the Nelson family tree. Electric Touch's string of luck is better attributed to Lawlor's former group Nic Armstrong & the IV Thieves, who rampaged Coachella in 2005 and whose anthemic Brit-pop heavily influences the band's full-length debut, slated for release this summer. ET amps at Flamingo Cantina on Friday.

You Don't Have to Put on the Red Light

Sex sells, especially if you're a prostitute. Ashley Alexandra Dupré, the 22-year-old call girl identified as "Kristen" in a federal affidavit detailing her Feb. 13 rendezvous with Eliot L. Spitzer, which led to his resignation as New York's governor, has had more than 10 million views of her MySpace profile since the scandal broke earlier this month. Her Paris Hilton-esque "What We Want" tops the bestsellers list for the month of March on Amie Street, a digital-rights-management-free distribution site, and has received airplay from New York radio stations such as Z100 (WHTZ-FM), while the video for an unofficial Snoop Dogg remix has gone viral on YouTube. "She's a sweet Jersey girl who worked extremely hard," recalls local producer Bruce Newman, who worked with Dupré in 2004, in his private studio, Barnstormers Music, behind the Yellow Rose gentlemen's club. "There was no make-up, no thrills, no drama, and if I asked her to sing something 20 times, she would. She was somewhat courageous, too." While Girls Gone Wild has uncovered more than seven hours of footage of Dupré after being tipped off to her appearance in a 2003 spring break production, Newman is still scanning his archives for salvageable remnants of the recordings. In the weeklong session, the two co-wrote a few songs, while Dupré laid down three of Newman's originals, including the oddly appropriate ballad, "Hello Stranger" (sample lyric: "Hello stranger, stranger in the dark. There is danger, danger in my heart"). "The recordings are more like an Amy Winehouse thing with an Austin touch, more old-school R&B," Newman says. "It's been four years, which is an eternity in the music industry, but they still hold up." Newman has set up his own site (www.myspace.com/ashleydupresings) to preview and sell "Hello Stranger," but interest is already starting to dissipate. As of Tuesday afternoon, the song had been played fewer than 100 times on the site. "These songs really humanize her," Newman counters. "It's a whole different aspect of her talent and her personality. She won't be as easy for people to dismiss. This isn't a fad."

Much has changed for Austin's Voxtrot since the indie-pop outfit last played a hometown gig May 2007, commemorating the release of its self-titled debut LP for Playlouder (see "The New Rage" May 18, 2007). The group weathered some backlash in the blogosphere and toured the world once over, including a run with the Arctic Monkeys, while firecracker frontman Ramesh Srivastava recently returned from a three-month sojourn in Berlin. "It's really hard to be a new band and make it through the first cycle," says Srivastava. "If you can get past that initial bump and keep going, then you can make it, but it's exhausting." Voxtrot has a few new songs recorded with local producer Erik Wofford and finally returns to Emo's on Friday. "This time around we definitely have less pressure," Srivastava relates. "I've come to think that less is more, even though touring is the only way that bands make money nowadays. It's worth the sacrifice of a little bit of money for sanity."

One Hell of a Ride

Willie Nelson's highly anticipated Comedy Central roast has been postponed indefinitely due to a scheduling conflict, which is probably a good thing, since video footage of daughter Paula Nelson kicking a fan at the Saxon Pub hit YouTube this week (www.youtube.com/watch?v=cAWt2y7yuKA). The elaborately staged stunt included breakaway tables and bottles and took place on March 12, in hopes of generating a bit of SXSW buzz. "It was a hell of a scene," recalls manager Todd Gardner. The Red Headed Stranger, meanwhile, is releasing the 4-CD, career-spanning collection One Hell of a Ride on Tuesday, in anticipation of his 75th birthday later this month, and appears alongside David Allan Coe as a circus ringmaster in Toby Keith's new film, Beer for My Horses.

• Saxophone specialist Martin Fíerro, an El Paso native and sideman to the Sir Douglas Quintet and James Cotton, died on March 13 following a brief battle with cancer. He was 56.

• The Octopus Project is contributing the previously unreleased "Wet Gold" and "Moon Boil" for the March edition of UK label Too Pure's monthly 7-inch Singles Club. Reserve yours at www.toopure.com/singlesclub.

• Philanthropists Dr. Ernest and Sarah Butler are donating $55 million to UT's School of Music in the College of Fine Arts, which will be renamed in their honor. The gift is the second-largest in the school's history and the most given to a music school at a public university. See "UT School of Music."

• W.C. Clark and Ruben Ramos are among the artists painting the historic town of Marble Falls this weekend for the third annual Bluebonnet Blues & Fine Arts Festival. In conjunction with the three-day gala, Joe Ely and Joel Guzman are taking the stage at Lorraine's. See www.bluebonnetblues.com for more information.