The conference's liveliest panel was at the Carver Museum where a discussion of hip-hop and politics moderated by The Source magazine Editor Soren Baker was part of a full day of free hip-hop events open to the public. Big names like David Banner, Jean Grae, and M1 of Dead Prez failed to show, but the panel still sparked some of the most real talk of the week. Kansas City rapper Tech N9ne insisted audiences aren't interested in political music, an assertion rejected by Bay Area hip-hop activist Davey D, who blamed corporations for denying airplay to positive albums and falsely painting a negative picture of black communities. "I don't want to hear anymore that the hood only wants to hear negative stuff," he said to applause. "I'm from the hood, and I'm saying the hood wants to hear Tech N9ne as well as Dead Prez." DP collaborators A-Alikes offered, "It's big business – the corporations are pimping, and we are the ho's." The panel, including Houston's Chingo Bling and Austin's Salih Williams, agreed on the importance of connecting with audiences independent from record companies that care more about the bottom line than an artist's longevity. 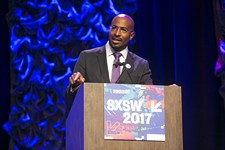