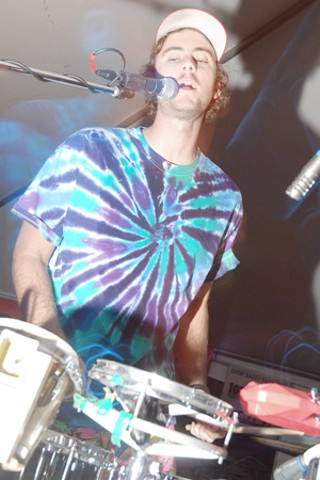 
Sub Pop loves to flaunt its diversity, and the front end of this year's showcase was indeed far-flung. It was a mixed bag of quality, as well. The Ruby Suns brought the Kiwi psychedelic pop of debut Sea Lion to the outside patio, but the vibrant textures that the trio swirled musically were undone by the listless and flat vocal harmonies. Inside, Sera Cahoone's band opened licking resonator and steel guitars to her acoustic. Plying songs from her debut Only as the Day Is Long, Cahoone's folk tunes may make a dent with Sub Pop's indie following, but beyond the banjo-bred arrangements, there's little substance that separates her from the usual fair of singer-songwriters, and her voice actually works best unfolded from the laconic indie style and given a full country flourish. She certainly couldn't compete with the onslaught of Pissed Jeans outside, shitting destruction across the stage as frontman Matt Korvette violated the mic and eardrums. Grand Archives, meanwhile, fulfilled the hype behind former Band of Horses and Carissa's Wierd member Mat Brooke's eponymous debut. Whistling across "Miniature Birds" to open, the quintet drifted through classic 1960s jangle, the chiming guitars of "George Kaminski," and Beulah bounce of "Setting Sun."