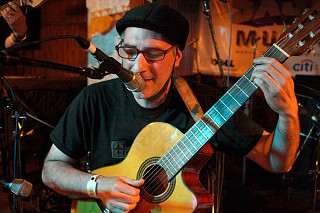 
If you were lucky enough to be at the Elephant Room for the U.S. premiere of Zona Tango, then you know that all electronic music is not created equal. Blood ties between Spain, France, and Argentina are often difficult to tease out in the contemporary world, but a spin through the back catalog of this Buenos Aires trio offered a glimpse into the promise that taped music holds for keeping old styles alive. Bandleader Pedro Menéndez, equally at home singing, blowing soprano sax, and slinging the accordion, dealt with borrowed instruments and a sporadically noisy crowd as he and his partners in crime, bassist Fito Vega and percussionist Gerardo Stubrin, played over prerecorded beats and tones looped through the sound system. Shot through with bossa nova rhythms and tango inflections, they resurrected Astor Piazzolla's "Adios Nonino" and notched an original "La France" inspired by the surreal, beloved film Amélie. The first half of the set drew from the 2004 release Electronico, while the latter compositions drew from 2006's Brazil Tango. In the modern world, it's a bitch to distinguish one nation's lounge from another, but even playing on instruments that didn't belong to them, Menéndez and company pulled it off.