Dana Falconberry, Southern by scholarship and soul, not birth 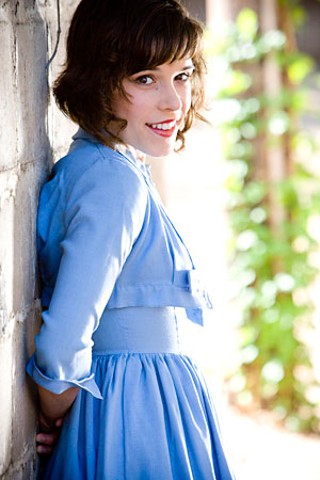 
Sitting outside of Caffé Medici on Austin's west side, Dana Falconberry's light-brown hair falls over her face to screen her equally delicate but penetrating eyes from the glaring sunlight. Legs crossed, she taps rhythmically against the small concrete table with the toe of her black boot, worn and swaddled in duct tape.

"I got these in Arkansas for $12 at a Goodwill," she laughs, looking at their tattered soles. "I've duct-taped them so many times, and they're probably due for another taping, but I just can't seem to let them go."

Falconberry possesses an old soul herself, her songwriting and voice haunting deeper than 28 years warrant. Her 2006 debut EP, Paper Sailboat, balanced a brazen, bluesy power, in songs like "Leave in the Middle of the Night," with achingly intimate narratives, such as "Sadie," Falconberry's voice encompassing a playfulness and beauty alongside a crushingly honest yearning and regret.

Born in Michigan, Falconberry began playing music only after moving to Arkansas to attend Hendrix College. She was drawn to the Mississippi Delta blues to the south and the folk of the Ozark Mountains to the north, studying the musical communities of both for her senior thesis.

"I had never been to the South before, and I was expecting something completely different just because the South is so glorified in books and movies," she confesses. "I expected the O Brother, Where Art Thou? cast to go strolling across the street or something, but of course, it's not really like that at all. But there are definitely moments, especially in Arkansas."

Upon moving to Austin in 2005, she quickly began collaborating with Red Hunter for Peter & the Wolf's debut, Lightness (Worker's Institute). After Paper Sailboat, Falconberry recruited the equally mesmerizing Gina Dvorak and Erika Maassen in harmonizing support, recording her debut LP, Oh Skies of Grey, set for release in June. Whereas Sailboat drew power from its stark arrangements, Skies showcases Falconberry's versatility before a band while still maintaining her alluring vocal force.