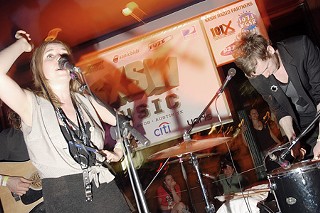 
Dancing like a Shangri-La and singing like a dove, quirky Stockholm indie-popper Lykke Li ("licky lee") charmed the leggings off any nonbelievers crowded around the tiny stage at Ninety Proof Lounge. With three shy boys at her side, the 21-year-old winked and mimed her way through her Björn Yttling-produced debut, Youth Novels, opening with "Dance Dance Dance," one foot in front of the other, never a moment standing still. When she gripped the kazoo hanging around her neck, all visions of girly singer-songwriters flew out the window. The kazoo gave way to finger cymbals and bells, as miniature keyboard and squeeze box formed the orchestration behind "Little Bit": "And for you I keep my legs apart and forget about my tainted heart," Li taunted, chin down, eyes fluttering. She flirted and posed, pointed and hypnotized, and in a too-short 20 minutes, she was off with "I'm Good, I'm Gone." That dose of quirky pop built and built until the bass tom was wrecked, and all Li could do was whip a cymbal until it cried. Jens Lekman was left grinning at his fellow Swede. The Swedish conquering of SXSW continues.