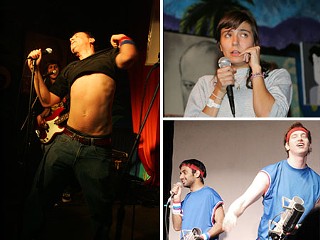 
There's the line that's sometimes attributed to Martin Mull (and other times to Elvis Costello) that goes: Writing about music is like dancing about architecture. Know what's even more ridiculous? Writing about comedy. Seriously. It's totally binary: Something is either funny, or it isn't. And if you explain to someone what's funny about it, it either sucks the funny out of it, or it wasn't that funny to begin with. So, with that in mind, the performers at (the early part of) the Super Deluxe Comedy Death Ray at both the Velveeta Room and Esther's Follies were as follows: funny, not funny, (perhaps very) funny, funny, funny, and funny. The mild surprise in there is that the most veteran of the lot, Barry Sobel, was the odd man out. Introduced by SXSW Film programmer and former local access TV funnyman Charlie Sotelo as "from the 1980s," Sobel's opening rap indeed sounded as if it were from back when he probably wore a keyboard tie onstage, as was his bit about overstereotyping (i.e., "A lot of Italian businesses are legitimate"). The rest of his set was him dying or his making jokes about him dying. Even that was only moderately less unfunny. So either Gary Gulman was genuinely funny, or everyone should have Sobel open for them. By comparison, Gulman looked like a comic savant. Sure, making fun of USA Today is borderline hack, but a joke about the end of the world winding up on Page 11 had a little nuance to it. The second set next door at Esther's opened with a fake heckling of Matt Walsh that seemed like someone lost a dare to make a "what has two thumbs and joke ..." funny. It also unintentionally highlighted one of the problems with comedy. The emcee for the second set? Hilarious. His name? Not a clue. Guy said it once. You see a band; they can drop their name after every song. A comedian who reminds the crowd of who he is after every joke would be kind of a dick. It's only a problem for "that guy," though, as the incredibly slow-moving lines outside both venues indicated that there was a lot more funny than not.