Out of the Amps of Babes 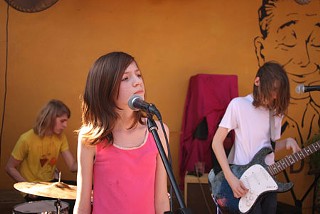 Feeling inspired by this surge of pro-family musical togetherness, I picked up the Preschooler from day care and took him down to Austin Java for the Girls Rock Camp day show. Benefitting the nascent GRC effort here in Austin, the show boasted an international lineup of kid-fronted bands including locals Code Rainbow!, New Yorkers Tiny Masters of Today, and the Brooklyn punk rock trio Care Bears on Fire, whose performance at the Convention Center's SESAC day stage earlier in the day drew onlookers out in the hall. The venue was gratifyingly packed, and the number of rockin' wee girls, who looked nothing like what the mall-based "girls' club" Libby Lu would prefer, was heartwarming. Harry Knowles of Ain't It Cool News was there, as well; here's hoping he bought a bunch of tickets for the Gibson Vixen guitar signed by the Go-Go's.

Rockin' in the Wee World 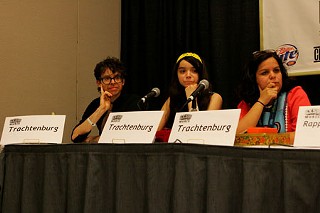 What does the kids' music market look like these days? What is kids' music? This was the central question of the Rockin' in the Wee World panel Friday afternoon, featuring local kids' music maven (and solid folkie in her own right) Sara Hickman; the Trachtenburg Family Slideshow Players; Tor Hyams, the mastermind behind the Kidsapalooza and Austin Kiddie Limits stages at Lollapalooza and Austin City Limits festivals, respectively; and Karen Rappaport McHugh, who organizes the kids' stage at the Stagecoach country-music festival in California.

The answer? Everything from Syd Barrett's "Effervescing Elephant" to the Beatles to, gulp, Hannah Montana (jury's still out on that one). What we do know is that there are artists out there, like Hickman, who are "interested in making the world a joyful, peaceful place" and feel "responsible for what we put out and what we want to say to our children and our neighbors' children." The goal, ultimately, is to engage the parents and children together and inspire them to make music as a family unit. "It's about being together," said Tina Trachtenburg, "especially families." "And that's a family value," continued Hyams, "contrary to what our president considers a family value."

Spare the Rock, Spoil the Child

So, the sitter's off this weekend, and you've got to find something to do with the kids. No worries, Mom and Dad. You're covered. Perhaps you'd like to start off with lunch at Whole Foods Market at Sixth and Lamar, which will feature Aussie Tastes and Tunes on its patio from noon to 2pm. Leave a little early, and head down to Auditorium Shores to see Austin's Super Pal Universe (produced by the aforementioned Sara Hickman) at 1pm; stick around to see the Rachel Trachtenburg Morning Show (she's the daughter/drummer for the Slideshow Players) at 1:45pm.

If it's not quite nap time after that and you're feeling a little warm, head over to Lady Bird Lake park, and cool off in the sprinklers, which are a huge attraction for the rug-rat set. Bring a towel and a change of clothes! Maybe your kiddos would even be interested in seeing Half Japanese at Waterloo Records at 6pm if they're really adventurous.

Sunday morning, head over to Ruta Maya for a free kids' show put on by the vaudeville comedy act Schave & Reilly. The coffee and breakfast tacos are pretty good there, too.

Keep on Rockin' in the Mom Jeans 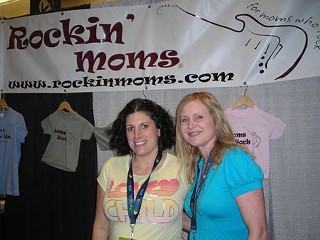 While visiting the trade show yesterday afternoon, I came across the Rockin' Moms booth, which is the brainchild of singer-songwriter Tiffany Petrossi (left). The purpose of the organization is to promote moms in music and to provide resources to women who are juggling musical careers with motherhood. Check it out at RockinMoms.com. Oddly enough, the booth next to theirs was baking chocolate-chip cookies. 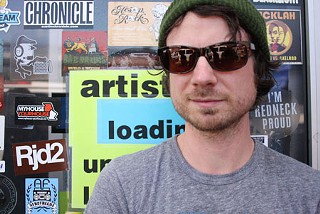 The Preschooler and I also checked out Sea Wolf's in-store at Waterloo on Friday afternoon. The sixpiece from Los Angeles, whose members spilled off of the stage into a wee orchestra pit, relied heavily on material from last year's Leaves in the River, including the lovely "Middle Distance Runner." The group's showcase is tonight at 1am at Buffalo Billiards. I'd totally be there if I weren't going to be asleep by then.