The throngs stretching blocks-long outside Stubb's may have assembled upon the promise of an all-star lineup, including rumors of an Eddie Vedder appearance that proved false, but the intended effect of bringing attention to the Iraq Veterans Against the War and the new Body of War documentary was more than accomplished. With wounded vet and docu-subject Tomas Young and his mother seated stageside, a flurry of single-song sets opened with Brendan James, American Bang, and RX Bandits' unexpected reggae sway. Most impressive was Mason Jennings' Dylan-esque drawl on "Jesus, Are You Real?" and Brett Dennen's "There Is So Much More," the young singer-songwriter cringing emotively behind his thick mop of hair. Über-activist and System of a Down frontman Serj Tankian was introduced by the emcee as "mildly insane," but his three songs behind the piano went for full committal. "Elect the Dead" pounded dramatic and intense as Tankian fluctuated between an ominous baritone and high-trilling wail, and "Honking Antelope" proved equally unwieldy. Special guest Billy Bragg brought the show back to point with a poignant "Farm Boy" and "Oh Freedom," while Ben Harper plied a supple steel across the resonator guitar atop his lap, matching his own haunted, soulful moan on "Well Well Well." The soft, surging flow of "Amen Omen" crested over the crowd as Harper's fist held trembling in the air with his voice. Calling Tom Morello to join him, the two traded acoustic verses on Harper's "Gather Round the Stone" before the Rage Against the Machine head took over the night watch with the gritty blues and half-mad howls of "Flesh Shapes the Day." Morello is incomparable in inspiring a crowd, seering and cutting like a cauterized blade on the acerbic "Guerilla Radio" and silencing the entire venue for "Battle Hymns." As with last year's Nightwatchman SXSW set at the Parish, Morello assembled an all-star jam with Bragg, Jennings, and Tankian for a romping sing-along of "This Land Is Your Land." Feel sympathy, then, for Kimya Dawson, who followed that show-stopper with a quietly nervous offering of "Fire," "I Like Giants," and brilliant "Loose Lips," eyes closed uncomfortably in her newfound spotlight. 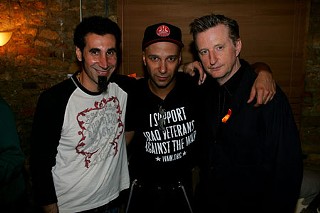