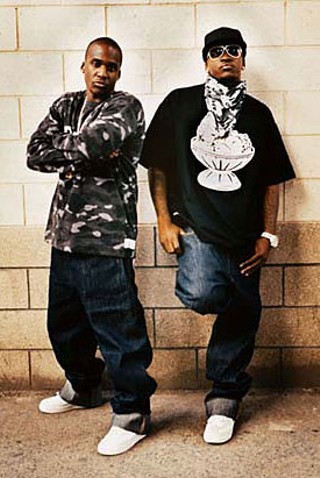 "Re-Up Gang is the best group in hip-hop today," declares a confident Pusha-T.

If you haven't heard of the Re-Up Gang, it's because they've been eclipsed by T's Virginia Beach concern. Clipse's Pusha and Malice have reached the apex of success, first collaborating with the Neptunes, then on 2002 debut Lord Willin' and its coke anthem "Grindin'," and finally with 2006 smash Hell Hath No Fury putting the two at the top of hip-hop's roll call.

Yet Clipse knows that better product's always in demand. As brothers, Malice the older by five years, the pair have absorbed the same influences (they're quick to point out their love for KRS-One and Wu-Tang) and come with a similar flow.

"It might get monotonous to the person who's not a purist," says Pusha.

To change speeds they've teamed up with two Philadelphia rappers, Sandman and Ab-Liva, to form the Re-Up Gang. Both new crew MCs bring something different to the table, whether it's Sandman's versatility (T says he's the character of the group) or Liva's knack for experimentation.

"I don't know what Liva's doing," laughs Pusha, "but when he pulls those parallels it's just a great marriage for what we do."

Sandman's not getting four bars to Malice's 16, either. Their recent mixtape, We Got It for Cheap, Volume 3: Spirit of Competition, features all four rappers swapping equal sets, and the quartet's working on a Re-Up Gang album for June. Breaking from tradition, the disc will feature beats from Timbaland, Diddy's Hitmen, as well as "hot new producers" Dame Grease and THX. Working with different talent has been a trying process for Clipse, who'd established a Pete Rock & CL Smooth-like alliance with Neptunes' Pharrell and Chad Hugo.

"I definitely see how spoiled we were," Pusha admits. "With the Neptunes' beats it's already guaranteed."

"It's been tedious," agrees Malice. "We gotta stop what we're doing and meet with everybody, as opposed to just getting ill beats and rocking 'em."