Seen How Things Are Hard

Hauled my carcass down to the Convention Center at the ungodly hour of 10:30am to check out the Lou Reed keynote interview with record producer Hal Willner. The musician with the "B.A. in dope but a Ph.D. in soul" is just cranky enough to keep things sorta interesting. After that was the panel called Through the Lens: Photographers on Musicians, which featured a lone woman, Autumn de Wilde, among a lineup of notables like Tom Wright and Paul Natkin. De Wilde, who's based out of Los Angeles, specializes in indie-rock artists like Beck, Death Cab for Cutie, and Rilo Kiley. What makes de Wilde's appearance at SXSW extra-special is that she opened an exhibit on Thursday afternoon at 4 Walls Fine Art (115 E. Fifth) called "pictures of me: rare photographs of elliott smith." The exhibit features photo outtakes with the dearly departed singer-songwriter, many of which can be found in her recently released tribute book, Elliott Smith (Chronicle Books), on sale at the exhibit. The collection is haunting in its portrayal of Smith's childlike nature, his creased face failing to hide any sadness, fatigue, or joy. De Wilde only shoots on film and refuses to Photoshop her work. "It disconnects the viewer from the emotion," she says in between bites of miniquiche, "if you erase every line in the person's face." The exhibit runs through March 22.

End of My Ears

As part of my ongoing quest to experience totally new music this year, I checked out Shining's in-store performance at End of an Ear (2209 S. First). The Oslo, Norway, outfit (a quartet in the studio and a quintet live), led by saxophonist Jørgen Munkeby, makes one hot mess of noise one can file under "experimental." Well, I experimented, took my no-thank-you helping, and gave myself a welcome respite from open-mindedness. I did, however, discover the Akai EWI, basically an electronic wind instrument, so, not a total loss. 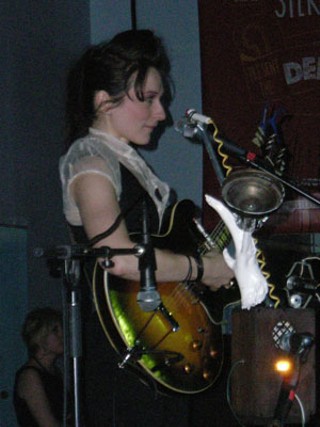 On a whim, I popped into the Paste/Stereogum party and caught a few minutes of My Brightest Diamond's set. It's funny how time can change one's attitude about an artist. When I saw her open for Sufjan Stevens in September 2006, I thought she was pretentious and boring. This time, she reminded me of early Jeff Buckley, an intoxicating blend of drama and virtuoso talent. I stand corrected.

Day of Wine and Poses

Thursday afternoon I attended one of the more ... interesting SXSW 08 events. Vintner Karl Wente hosted a private tasting at Moonshine of a selection of his family vineyard's wines to celebrate the launch of Discover the Wine, Discover the Music, a unique series of pairing wines with songs. The concept involves a progression of wines to mesh with the arc of an evening; for example, "We Hung the Moon," a duet by local country stalwarts Jesse Dayton & Brennen Leigh, pairs with the light and fruity Morning Fog Chardonnay for aperitifs, while "Bittersweet Faith" by Thievery Corporation pairs up with a peppery Sandstone Merlot during a chocolate-heavy dessert.

Wente, a fifth-generation winemaker who's prime fodder for The Bachelor, simply paired his two loves. "There are so many parallels between wine appreciation and music appreciation," he explained while pouring a glass of Cabernet Sauvignon. "I'm a musician myself; my whole house is dedicated to making music."

The way the Discover series works is fairly simple: Purchase a bottle of Wente wines with a "necker" (a card strung around the neck of a bottle, usually in the $14 price range), use the promotional code on the card, go to www.wentevineyards.com/discover, and download the current series' six songs. Wente plans two series a year; the next series launches in May and will feature Allison Moorer, among others.