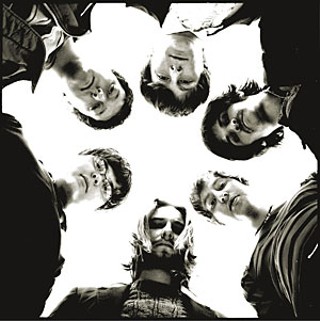 "I listen to grandparents music," admits Explorers Club vocalist, guitarist, and songwriter Jason Brewer. "The song we do, 'Don't Forget the Sun'? I was totally trying to be Burt Bacharach. I was like, 'I want to be on The Lawrence Welk Show.'"

It might not be 1966, but file the Explorers Club's debut, Freedom Wind (Dead Oceans), right next to Pet Sounds, nonetheless. The Charleston, S.C., sixpiece, four of whom sing, could have come of age on some Southern California beach chasing girls and catching waves. Instead, Brewer, drummer Neil Thomas, multi-instrumentalist David Ellis, keyboardist Stefan Rogenmoser, guitarist James Faust, and bassist Wally Reddington cohered at Charleston Southern University in 2004, employing the best vocal harmonies this side of Motown.

While Brewer has no vocal training, he picked up a few things from his parents, both church-choir directors, and a record-collecting neighbor. Drawing heavily from the Beach Boys and Phil Spector, as well as the Association and even the Zombies, the Explorers can't deny the timelessness of sunny surf pop.

"We want to have a lot of fun," enthuses Brewer. "It's not a giant art exhibition or anything. We want the crowd to be involved; we want people to have fun. You can't play the music we do and expect it not to be fun. You have to be entertaining."

Aping the Beach Boys is nothing new – Panda Bear's dreamy 2007 LP, Person Pitch, took the cue – but the honest naivete in the Explorers' 2½-minute gems "Forever," "Lost My Head," and "Last Kiss" is refreshing. No pretension here, only sincere admiration.

"Brian Wilson called me a few weeks ago," Brewer giggles. "He said how much he loves our group. ... If the guy who I'm faithfully ripping off likes what I do, I don't care what other people say."