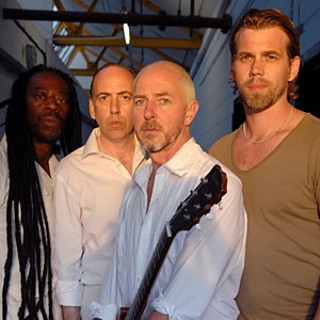 "The present is the future gone wrong," says a whispery Mick Jones. It's hard to argue with that logic, especially when it issues from one-half of the Only Band That Matters, still. When the former Clash guitarist and emotional counterpoint to Joe Strummer's righteous rasp found himself unhappily searching for "guaranteed personality," he had no idea how prescient his melancholic political forecast would be.

"We've come full circle in lots of ways," says Jones. "You lose yourself, don't you, in all of it? One does."

Hence the formation – post-Clash, post-Big Audio Dynamite, post-Pete Doherty & the Libertines (whom he lent his production talents to) – of Carbon/Silicon, the chiming, shining, and altogether exhilarating end result of 30 years in the punk-to-pop-to-rock trenches.

"As far as the Clash," Jones argues, "that anger and that sense of negativity was part of the musical scope more than anything. We were like, 'Yeah, we're punks, but that means punk can be anything you want.' So I've always tried to adhere to that: 'We can do anything!'

"But we're still searching for meaning."

Back with his pre-Clash, London SS bandmate Tony James, Carbon/Silicon hardens B.A.D. at their most approachable, all ringing melodies and sheering guitars. The band's debut, The Last Post, sounds of a soldier sick of endless culture warfare, ready to plug a barbed-wire-stemmed rose in the gun barrel of the present. Last Poet is less a trouser-pressed summation of Jones' iconic punk past than a grimly optimistic, no-longer-bleary eyeballing of the present: Radio Clash sent Sputniking skyward on "Love Missile F1-11."

"There's so much bad stuff going on," laments Jones. "I don't want to be any part of it. We outgrew that, and now we want part of what's good no matter how small it may be. We're just happy to not be a negative influence.

"We've gone through it all, and we've found ourselves a bit. In England we expect the worst, and so if anything happens, well, there you go. If it's the worst, it's to be expected. England isn't positive, and so [with Carbon/Silicon] I think we've finally discovered a very good way of looking at things."