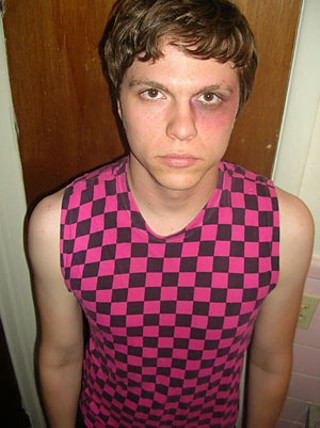 Jay Reatard is the bastard child of Memphis' underground garage-rock scene. Born Jay Lindsey, he left home before high school, adopting the surname of his first punk group, and cut his first 7-inch at age 15. From there he fell under the mentorship of former Oblivian Eric Friedl of label/store Goner Records.

"In Memphis the biggest influence is the constant negativity that surrounds you, the chip that puts on your shoulder makes you want to work hard to escape it," says Reatard, who already has more than 50 recordings to his name. "Everyone there is so lazy and apathetic. It inspires me to be the opposite of that."

Harsh and urgent, Reatard's decidedly lo-fi solo debut, 2006's Blood Visions (In the Red), on which he plays every instrument, violently erupts with Sex Pistols filth and Ramones fury, razor-sharp riffs tearing into huge power-pop hooks. Reatard refers to it as a "greatest hits," the accumulation of lessons learned from his numerous side projects, including the Lost Sounds, Angry Angles, and the Bad Times, a one-off project with Friedl and King Louie. It sounds like one, too, frothing at the mouth as 15 songs unwind in 28 minutes.

"Why teach someone something that you can already play?" Reatard demands. "I can't compromise. I don't like being out of control, having to give in to someone else's ideas of what your song should sound like. I tend to completely eat, sleep, and breathe my process.

"It's something I'm really close to."

Reatard's currently working on a six-single series for Matador, beginning with next month's "See-Saw." Just don't expect him to abandon his Memphis roots anytime soon.

"I'm afraid that if I change up my environment, I might fuck up the whole chemistry," Reatard concludes. "When great bands become popular and move to L.A., that's when they start making shitty records."