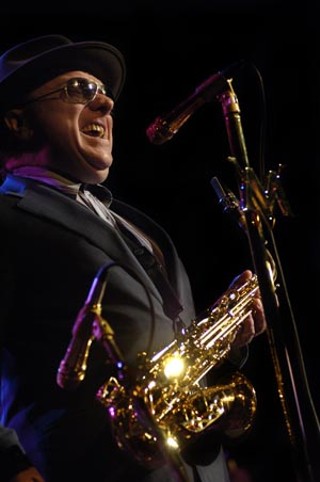 
The sun still shone when Van Morrison took the stage for his unofficial SXSW kick off, but the main thing worrying the capacity crowd at the newly revamped Austin Music Hall was whether the master would "Moondance." Never mind that Van the Man has a perfectly good new album coming out on April 1, Keep It Simple, fools continue to come out of the woodwork expecting an epic, Springsteen-flavored oldies-but-goodies marathon. Meanwhile, the core of the show drew from the new disc. Backed by a full band featuring members of the original Caledonia Soul Orchestra, Morrison killed on bluesy new songs including "School of Hard Knocks," "Don't Go to Nightclubs Anymore," which had the folks down front dancing in their seats, and the titular "Keep It Simple," both a wise koan and a musical philosophy. Given that balcony tickets started at $95, even a short encore would have been a nice gesture after a barely-90-minute set. But Morrison did play "Moondance," albeit padded by band intros, a haunting version of "St. James Infirmary Blues," and left nobody wanting for his spiritualized scatting. Morrison remains in great voice, and after 40 years of rocking, he's earned the right to play it cool.