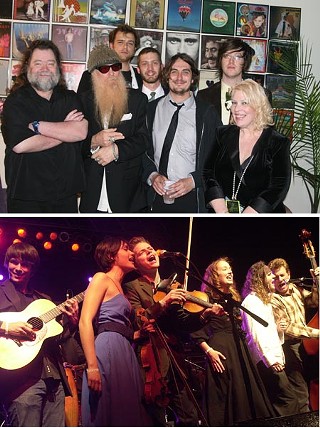 The true spirit of the 26th annual Austin Music Awards was best expressed by its first recipient of the evening, World Music Band of the Year Atash's frontman Roberto Riggio, who offered via the Sufi poet Rumi: "We have fallen into a place where everything is music." With SXSW swarming outside, the newly renovated Austin Music Hall served as musical epicenter, a convergence of past and present embodied in the bookending collaborations of the evening: the opening tribute to Walter Hyatt and billed headliner Rokkervil, teaming resurrected 13th Floor Elevator and AMA Musician of the Year Roky Erickson with Indie Band winners Okkervil River.

Following show coordinator Margaret Moser's welcome, the AMA's paid tribute to local artists lost in the past year, including punk icon Lance Hahn, bluesman Gary Primich, and drummers Buddy Miles and Uncle John Turner. As the lights dimmed, a booming announcement introduced Uncle Walt's Band, the beloved local trio of Walter Hyatt, Champ Hood, and David Ball. With Ball's upright bass taking center stage, the place of his two departed bandmates was filled by Champ's son and nephew, Warren and Marshall Hood. Joining in to pay homage to Hyatt, who died aboard the Valujet plane crash in 1996, were Jimmie Dale and Colin Gilmore, following Ball's gorgeous version of "Desiree" with "Georgia Rose." The acoustic legacy of Uncle Walt's Band was best encapsulated in the offerings of the trio's talented offspring, Warren, Taylor Hyatt, and Aubrey Ball, the latter smoking on "Are We There Yet Momma?" while Taylor retrofitted his father's "Rollin' My Blues" with a rocking swagger. Stylistic inheritors the Belleville Outfit energized the swinging jazz of "Outside Looking Out," but Lyle Lovett, who produced Hyatt's solo debut, King Tears, brought the poignant core of Hyatt's songwriting to bear by wringing a haunting sincerity from the devastatingly beautiful "I'll Come Knocking." After Hyatt's widow and children accepted his induction into the Austin Music Hall of Fame, everyone took the stage for a roaring send-off with "As the Crow Flies."

Roy Head also made it a family affair, bringing his son and American Idol finalist Sundance Head onstage to belt "Stormy Monday" as Spot Barnett blew a tempest from his tenor sax. Papa Head grooved proudly while Sundance tore through "Mustang Sally," and proved he still had some mic twirling moves of his own as he unleashed his hit "Treat Her Right," sending the audience into a fit as he dropped to the floor and humped the stage. Say what you will about Head's crotch grabbing bravado, the Texan soul shouter can still fire a crowd.

The award presentations offered equally uproarious moments, from the Jolly Garoger's pirate confetti gun salute for Best Novelty Act and Octopus Project's Yvonne Lambert leading a chorus of "Deep in the Heart of Texas" to Brownout's declaring, "It's good to finally beat those assholes" upon besting side project Grupo Fantasma for Best Latin Contemporary.

While Rokkervil waited in the wings, the crowd seemed most thrilled for the reunion of Houston punk poppers the Judy's, who brought the glory days of 1980s live music mainstays like Liberty Lunch and Raul's back to life with local hits "Her Wave" and "The Grass Is Greener." After stringing up pots and pans for the percussive bounce of "Right Down the Line," the trio closed with fan favorite "Guyana Punch," slinging a pitcher of beer across the stage and into the front row.

Though taking home the award for Best Blues Artist and Electric Guitarist, Honeydripper film star Gary Clark Jr. showcased his versatility with cool licks on "Can't Sleep at Night," a smoking solo on "Don't Owe You a Thang," and the rocking turn of "Breakdown."

The Judy's (Photo by John Anderson)

Then Rokkervil fulfilled the night's promise, as Okkervil River delivered a cathartic "Our Life Is Not a Movie or Maybe" and "For Real," Will Sheff's howl bloody and curdled against the cacophonous crash of keys and guitar. After leading the crowd in clapping through "Unless It's Kicks," Sheff introduced Erickson, and Rokkervil commenced with its own unsettling roar of "You're Gonna Miss Me." Okkervil ripped psychedelic as Erickson blew harp and harmonized on "Starry Eyes" before closing the night with epic "I Walked With a Zombie." If we have truly fallen into a place where everything is music, then everything is looking up.