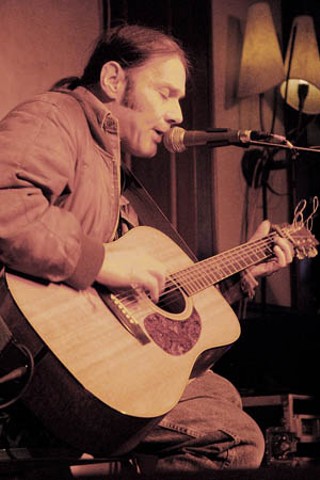 
Gamblin' House, the latest album from North Carolina guitarist Malcolm Holcombe, sounds like the blues. No doubt Holcombe's had them many times in his life: His voice is all gravel and sandpaper, and his appearance, that of a friendly drifter or war-scarred Southern uncle. And he's got stories, many miles of road, and that's part of his populist appeal. Alternating between sitting and standing hunched over the mic, Holcombe became the proverbial storyteller, making something as mundane as "Goin' Downtown" sound like the kind of story that gets told before a bar fight: "I gotta hundred dollar bill in Denver, Colorado. I got holes in my pockets, gonna buy an El Dorado." "Baby Likes a Love Song" and "The Shade" were sweeter fare, and his melodies were spare and seductive, but most of Gamblin' House rambles in protest songs, and Holcombe jerked and strummed, almost possessed, the way old blues musicians used to when they felt the spirit move them.