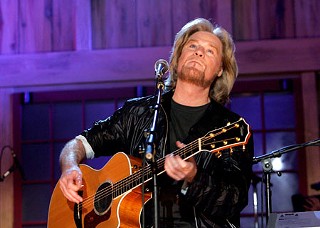 
A recent Pitchfork interview with Daryl Hall pinpointed the appeal of Hall & Oates, namely with indie rockers who grew up in the 1980s listening to them on the radio. The crowd that showed up for his set, however, was testament to his generational appeal, middle-aged to middle school. Hall, backed by a fivepiece band, welcomed us to "his house" and offered versions of "You Make My Dreams Come True," "Everything Your Heart Desires," and "Cab Driver" that were steelier and more soulful than the pop-fed originals. "I Can't Stop Dreaming," "Someone Like You," and "It's Uncanny" simmered, the latter winding into a soul-funk breakdown. Hall's voice is still in fine form, and he broke out the whoo-whoos and skiddly-bops with ease. He was in a fine mood, too, veering off into a VH1 Storytellers tangent with his acoustic guitar, talking about how his last Austin appearance was canceled because he was diagnosed with Lyme disease ("The ticks got me!") and even taking a soft jab at former partner in crime John Oates. Then, a reggae version of "Maneater" that sounded like gold, and it didn't even need a sax solo.