8pm, Club 115 Brazil isn't all samba rhythms and breezy bossa nova. Some musicologists argue that a version of the electric guitar was developed in Brazil around the same time Les Paul was fiddling with the knobs on his axe. And never doubt the rocking-out ability of a country that produced metal-maniacs Sepultura. Nobody on this lineup is shredding quite that hard, but São Paulo power trio Debate pounds out rock full of slashing guitars, heavy drums, and screaming vocals. Telerama, a Fortaleza fourpiece, describes itself as "roots nerd rock or the world's next pop delight." Perhaps it's not an either/or question as these indie rockeros serve up pop ballads with a lovely female vocal. Same goes for Nancy, a lady-led fivepiece from Brasília that's catching considerable stateside blog buzz. Fruet & os Cozinheiros is a fivepiece whose moody art-rock shifts joyful to brooding without warning, while Buenos Aires native Valerio Rinaldi serves up earnest, adult contemporary pop-rock en español. The mellow rock of Norton makes them Portugal's answer to the Postal Service. – Thomas Fawcett 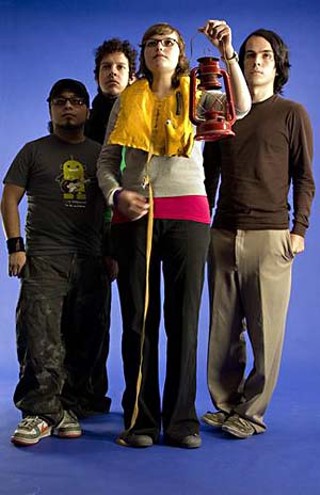 8pm, Soho Lounge George Romero's knee-gnawers aren't the only creepers crawling straight outta Pittsburgh this month. As the Iron City-based indie upstart Get Hip proves, going Mondo Topless doesn't necessarily equate with a bullet in the brain pan, although things do get a bit fuzzy. Phoenix's the Breakup Society drives their Cramps-y brand of power-pop out of the desert and into your head, while Dallas' Mullens just go where the action is, loudly, thrillingly, and, most importantly, danceably. Far be it from the five-one-deuce's very own Ugly Beats not to rock your Stride Rites off with their supercool, headache-eliminating sonic ricochet back and to the left, recalling the cordite-scented choral clusterfuck that was Camelot's garage-rockin' backdrop. Since you're already kicking up a fuss on the floor, you might as well wait up for NYC's Paul Collins' Beat, whose pre-Devo harmonies pair off with bang-on songwriting and blow-the-lid-off-the-lone-guitarman theory. But don't get paranoid, man. Just remember to pick out the Stems, who recall no one so much as the Seeds. Leave it to the rocked 'n' loaded wipeout of the Cynics to leave us feeling zombified. – Marc Savlov

9pm, Parish While Canadian gale force Broken Social Scene takes a well-deserved break from the road, Kevin Drew and Jeffrey Remedios' Toronto imprint only gains muscle with acclaimed albums, reputable output, and perfect pairings. Suburbanite sevenpiece from Milton, Ontario, the Most Serene Republic set the sun with the joyously orchestral indie pop of last year's Population, a mishmash of crisp gems and more chaotic glimpses that leaps from 2006 awesomeness Underwater Cinematographer. New A&C signees but rock & roll veterans Constantines land with classic jams from the upcoming Kensington Heights. No surprise that the Toronto quintet moonlights as Neil Young tribute band Horsey Craze. Jason Collett finds his center on grand third effort, Here's to Being Here, applying a bit of Boss to his rustic sound. Cardiff, Wales, sevenpiece Los Campesinos! is one of few non-Canuck Arts & Crafters, and its expansive, insanely catchy, keyboard-heavy Hold on Now, Youngster ... is in great shape for a well-lit dance floor. Montreal epic rock quintet the Stills close her down with a vengeance on new, still-untitled third album, their first on A&C. Don't let the past get in the way. – Darcie Stevens