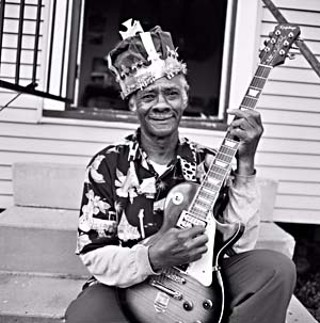 7pm, Continental Club Offering a taste of the two-day festival held annually in New Orleans that celebrates the unsung heroes of blues, soul, and rock & roll, Ponderosa Stomp's a respite from the hordes and a glimpse into a past filled with grit and heart. The scope of the music presented is always vast, from Dallas garage rockers Kenny & the Kasuals to the primitive grooves of the Flaming Arrows Mardi Gras Indians. Philly soul maven Barbara Mason of "Yes, I'm Ready" fame matches the intensity and no-holds-barred guitar work of NOLA's Little Freddie King, cousin to Lightnin' Hopkins. The classic soul of Mississippi's Wiley & the Checkmates, reconstituted after a 25-year break, and the hillbilly honky-tonk of Louisiana's Michael Hurtt & His Haunted Hearts, relatively new to the scene, add to the Stomp tradition. – Jim Caligiuri

8pm, Mohawk/Mohawk Patio This year Thurston Moore's cultlike label family, Ecstatic Peace!, has expanded a bit. It's not hard to envision the Sonic Youth guitarist as a sort of spiritual den mother up there in the sprawl of Massachusetts. Certainly it's the vibe on Moore's 2007 sophomore solo album, Trees Outside the Academy, which will no doubt provide the meat of his headlining set outside. Preceding Papa Thurston is blues-punk Nashville trio Turbo Fruits, featuring Jonas Stein of Be Your Own Pet; melodi-hardcore Boston boys Black Helicopter; and experimental NYC trio Tall Firs. Nashville's aforementioned Be Your Own Pet, led by unmanned firehose Jemina Pearl, just dropped its sophomore scream, Get Awkward, produced by Redd Kross' Steve McDonald, and once again, it can't sit still. Before Thurston, pal J Mascis will probably just solo for 30 minutes. Inside, it's Ecstatic Peace!'s more experimental cabal: Moore's side project, Northampton Wools; one-woman noise machine Leslie Keffer, whose Feels Like Frenching just debuted on the label; NYC violinist and Moore collaborator Samara Lubelski; Portland, Ore.'s Little Claw, anchored by Kilynn's Patti Smith-esque wail; Brooklyn's electro-feedbackers Sightings; and Boston's psych collective Sunburned Hand of the Man. – Audra Schroeder

8pm, Parish It might not be widely publicized, but Merge Records' 2008 showcase is being sponsored by the FBI's Federal Witness Relocation Program. Maybe the easiest target is opener Portastatic, which is just the nom de rock of label poobah Mac McCaughan of Superchunk. He's still working off of 2006's stellar Be Still Please, but hey, it's his label. While not actually aliases, Baltimore duo Wye Oak jangles banjos on debut If Children, and the Radar Bros. do a wonderful imitation of the Silver Jews masquerading as a Beachwood Sparks cover band. Meanwhile, Shout Out Louds have been harboring either Robert Smith's evil twin or his doppelgänger in their cold Swedish climes. She & Him is the vaguely named collaboration of Portland, Ore., bard M. Ward and actress Zooey Deschanel, and their also vaguely titled Volume One is utterly charming. After eight albums, it's no secret that Destroyer is really Dan Bejar, but epic latest Trouble in Dreams totally blows his cover. – Michael Bertin

8pm, Club 115 Home base to such Canadian luminaries as the New Pornographers and Neko Case, Vancouver's Mint Records doesn't know how to say no. They back everything from Americana to hard rock to TV personality Nardwuar. Singer-songwriter Lindsay Jane pulls her roots out from jazz on November's self-released Lovers Find Reasons. Victoria, British Columbia, chanteuse Carolyn Mark is Neko Case's Tammy Wynette on her sixth and latest, last year's subtle and gorgeous Nothing Is Free. The Choir Practice comes out of left field with 15 members but no robes, the Vancouver choral group all indie rock, and better yet, they can really sing. But enough with the crystalline. Vancouver duo the Pack A.D., Becky Black (vox, guitar) and Maya Miller (drums), leads a secret life on the Mississippi Delta. Newbie Tintype is all Black's wail and Miller's hip. Vancougar, on the other hand, keeps the power for pop. The Vancouver all-girl quartet shouts out 1960s from the garage on upcoming sophomore LP Canadian Tuxedo. Bella takes the night out with a disco ball and a hi-hat, plying 1980s indie pop with great hair. All we need is hip-hop. – Darcie Stevens

8pm, Pangaea Somewhere in the Billboard offices is a dartboard broken up by musical genres (e.g., "Lesbian grad rock"), and every year somebody hurls darts at the board, and the staff puts together its annual SXSW showcase accordingly. OK, that's not true, but it explains the strange variety of groups the mag fields every year. Kicking it off is the Airborne Toxic Event, lit rockers with a nod to Joy Division and Velvet Underground. If you guessed Christopher Denny's age and thought you were only half off, you'd still probably overshoot it by a factor of two, because the twentysomething's Jimmie Dale Gilmore warble sounds like he was born in the 1930s. For the "out there," singer-songwriter Nicole Atkins hails from Neptune (New Jersey), and her dynamics take her well beyond the hurt-girl-with-guitar stuff. After revived Aussie rockers the Vines, Robyn, Scandinavia's answer to Pink, closes the showcase with a mix that's skinny 1980s techno pop dressed up with 1990s Madonna-meets-Ace of Base production. – Michael Bertin

9pm, Volume While Strange Music's roots are planted in Kansas City, Mo., the label's network extends to Phoenix, Seattle, Houston, and Austin. Intrinzik hollers from the Valley of the Sun with his brand of futuristic rock-rap on My Favorite Album. The Emerald City is repped by the Grayskul trio, who has been promoting Bloody Radio on tour with Atmosphere and Kansas City's own Mac Lethal, who isn't keen on Juno and really wants you to cop his debut, 11:11. Locally, original member of H-Town's Street Military, KB da Kidnappa, gives the antidote to lyrical poison on new LP Spitting Venom, and local perennials Dirty Wormz pack the stage with a seven-man onslaught. It's really KC's night to shine, though, and Prozak keeps things as happy as he can with Tales From the Sick, while Krizz Kaliko hollers at LL Cool J's "I Need Love" on Vitiligo. Kutt Calhoun goes on a lyrical tour of the country before KC's Tech N9ne brings his Twista-fast rapping under the lights. – Chase Hoffberger

9pm, Fuze Street-Science magazine and Hot 93 (on your Austin FM dial) showcase Texas talent, and that's where the comparisons end. Da C.O.D is our first conundrum, a local fearsome foursome quick to rap about "rollin up swishas" while donating 10% of their CD sales to Developmental Drug Counseling. Houston's JezuFavio dons cornrows and raps over accordions. Off Steak N' Shrimp Records, Lucky reminds us that Space City is once and for all the home base of the seein' double slow roll with Ahead of My Time, while Da Mex Connect hustles 'n' flows over a scorching pace of hi-hat slams. Also from Houston, Mr. Capone-E balances between working with Lil' Flip and staying Dedicated 2 the Oldies. As for Chingo Bling, well, he turns raps into comedic tamales. Buckle up. – Chase Hoffberger