7pm, Parish Hollywood's Hotel Cafe is considered one of the premier singer-songwriter venues in the United States. For the past five years, it's sponsored a tour of the U.S. and UK with the goal of sharing a communal vibe between acts and audience. The 2008 version features a dozen slots and offers a wide variety of sound from electronic to folk rock. Highlights include the decidedly modern blues-rock of Long Beach's Rocco Deluca & the Burden; San Diego's Greg Laswell, whose 2006 debut, Through Toledo (Vanguard), broke a few hearts; and L.A.'s quirky Jim Bianco, who mixes blues and swing reminiscent of Tom Waits and has just released Sing on the Hotel Cafe label. Nashville-born Cary Brothers is actually a singer-songwriter and one of the founders of the Hotel Cafe tour. Brothers brought anthemic underpinnings to stately chamber folk on his 2007 release, Who You Are. The sweet vocals of NYC's Ingrid Michaelson and L.A.'s Sara Bareilles end the night on an upnote. – Jim Caligiuri

9pm, Scoot Inn Definitive Jux and Dirtee Stank are best known for the verbosity of their MCs. Founded in 1999 by El-P and Amaechi Uzoigwe, New York's Definitive Jux has pedigree that includes Aesop Rock and Mr. Lif and once represented Murs and RJD2. Across the Atlantic, London's Dizzee Rascal founded Dirtee Stank to bridge indies, majors, and the street. Bringing that Aesop flow and comparative mindfuckery, Bisc1 reps Queens, and Devin the Dude & the Coughee Brothaz bring the high from H-Town. Oakland's Del the Funky Homosapien just dropped Eleventh Hour, building on a career that includes six solo albums, two collaborations with Gorillaz, and a turn writing lyrics for cousin Ice Cube. His lyrical creativity is matched by Brooklyn rapper El-P's visionary outlook. UK capitalistas: Jammer's set mixes with Newham Generals and Dizzee Rascal, each coming gruff and full of grime. – Chase Hoffberger

8:30pm, Elysium London, 1991: DJs Matt Black and Jon More wanted a record label that focused on abstract and ambient hip-hop. Ninja Tune's their brainchild, finding success in Kid Koala, Diplo, and Saul Williams. London musician Pop Levi's solo career led to the launch of Ninja Tune branch Counter, a wing dedicated to supporting rock acts that still hold tight to the Ninja ideal. Falling in with this outlook is the Heavy, a UK quintet that brings Motown to the modern age. Alternately, Houston's Yppah spins an unlikely mix of acoustic guitars and beat machines. Having mixed Nas' "Made You Look" into a club-hopper, Montreal's Megasoid is fond of knob-twiddling, as is fellow Montrealer Ghislain Poirier, who just dropped his sixth LP and first on Ninja Tune, No Ground Under. The dance-floor-minded MC is quick to spit over dancehall, crunk-hop, dub tone, and even Arabic rhythms. Baltimore-by-way-of-Sydney punkers the Death Set club the insanity. – Chase Hoffberger

8pm, Soho Lounge Once home to underground legends Dead C, Guided by Voices, and Brother J.T., Philadelphia label Siltbreeze tests positive as integral to indie rock's DNA. The 'Breeze was resurrected in 2005 with Columbus, Ohio, trio Times New Viking's racket Dig Yourself, and now it's birthing a new generation of weirdness. It takes two to make noise: Montana twopiece Ex-Cocaine brings the wobbly swell from last year's Esta Guerra; NYC duo Blues Control – Lea Cho and Russ Waterhouse – make mood music, but the kind Siltbreeze's familiar with. Lilting piano and guitar-effect wizardry melted third ears on last year's self-titled debut on Holy Mountain; their third album drops on Siltbreeze later this year. Australian duo Naked on the Vague's The Blood Pressure Sessions sounds about as dark as their music, and on vinyl it's primitive and witchy. xNoBBQx, another duo from Down Under, does the drone, as well. Portland, Ore.'s Eat Skull steps on the fuzzbox; former Wisconsonite Kevin De Broux, aka Pink Reason, sorts through art savagery, punk, and drone on last year's vitriolic Cleaning the Mirror; and Ohio legend Mike Rep does whatever the hell he wants. Proprietors of the "shit-gaze" movement, Columbus' Psychedelic Horseshit doesn't care about pesky chords on last year's Magic Flowers Droned. Times New Viking brings it all back around. – Audra Schroeder

8pm, Ninety Proof Lounge Like tango in its infancy, Colombian-born cumbia has long been snooted at in Argentina as music of the lower class. What do you get when talented Argentine DJs start mashing up the genre with every beat-based music they can scrounge up? Call it electro-cumbia, because the Buenos Aires-based Zizek Urban Beats Club, named for Slovenian-born philosopher Slavoj Zizek, cooks up some of the most exciting dance music in the Southern Hemisphere. Its loose collective of artists has turned the sound experiment into Buenos Aires' hottest weekly dance party and counts Diplo as one of its biggest cheerleaders. Tremor mixes traditional music of the Argentine pampas with glitchy found sounds from zippers and dot-matrix printers, while the classically trained Axel K Soundsystem spices his dubbed-out big beats with live percussion and accordion. The only American on the lineup is Oakland's Oro11, who got hooked on cumbia while living in Buenos Aires and serves up blistering hip-hop with dancehall beats. El Remolon and King Coya & el Trip Selector plug into the cumbia prior to Frikstailers' frenetic fusion of high-energy baile funk and reggaeton saying good night. – Thomas Fawcett 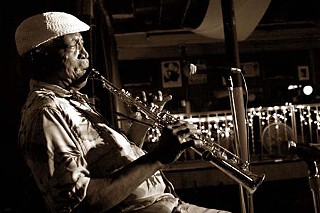 8pm, Lamberts No one has done more to keep Texas blues alive lately than Dialtone owner Eddie Stout. The ambassador of Texas blues sells women's shoes at the mall by day and runs the indie label out of his South Austin apartment by night. Dialtone isn't as interested in discovering the next Stevie Ray Vaughan as it is in tracking down lost Texas bluesmen who never got their just due. Finding those unsung heroes of East Austin and Houston's 3rd and 5th wards can take as much luck as persistence. While Stout was doing an interview and photo shoot in Houston with a local musician, Joe Doucet walked in and pronounced, "I can play that guitar you got there." That was no lie, and Doucet's swampy zydeco blues bless one of Dialtone's strongest efforts. Houston guitarist Lil Joe Washington was homeless when he first hooked up with the label and has since recorded a gutbucket blues testimonial. Legendary saxman Spot Barnett and the Texas Eastside and Northside Kings represent for CenTex, while barrel-chested Fort Worth guitarist Ray Reed, whose Where the Trinity Runs Free is Dialtone's latest release, shouts out gritty originals and standards. – Thomas Fawcett 8:30pm, Velveeta Room Although primarily a Toronto-based distributor of independent record labels, Outside Music also runs an in-house label, which has released discs from the Sadies and Fred Eaglesmith, among many others. This showcase spotlights singer-songwriters from the Great White North. Rebekah Higgs is a 24-year-old from Halifax, Nova Scotia, with a folk-rock heart that's drawn comparisons to Feist, though she tends to infuse her work with vocal loops and electronic flourishes. Toronto's Matthew Barber, who just released his fourth disc, Ghost Notes, is a bit more introspective. Matt's sister, Jill Barber, also from Halifax, mixes folk, country, and the occasional torch song into an idiosyncratic whole on her 2007 release, For All Time. Perhaps the best known artist of the evening is Toronto's Oh Susanna, aka Suzie Ungerleider, whose career is entering its second decade. A contemporary of Gillian Welch and Iris Dement, Ungerleider released Short Stories last year, which garnered acclaim for its literary and deeply personal nature. – Jim Caligiuri