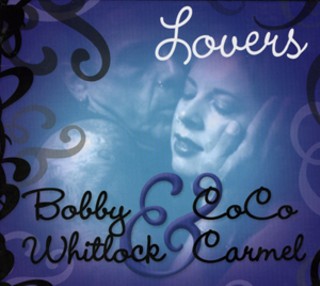 
Thirtysomething years ago, Texan Boz Scaggs invented adult contemporary radio by moving millions of Silk Degrees. Bobby Whitlock and wife CoCo Carmel's studio debut, Lovers, transforms silken Left Coast murmurs of the heart into gritty Southwestern declarations of ardor. Her tart saxophone and his thick, rich, deep grain delivery pledge the title track, singers entwined at the chorus never to unclinch. Equally hewn comes "Dice of God," seven-minute heavyweight rumble between Whitlock's preacher command and God's own truth. Austin axe brigade Stephen Bruton, David Grissom, and Eric Johnson carve up both sides. If 18 strings weren't plenty, Willie Nelson's guitar work on Carmel's "True Love," flushed and fluttering with its writer's vocal, courts divinity. The album's centerpiece, "Best Days of Our Lives," plays out as epic at the 1946 Best Picture of the same title, inflamed by Whitlock's Hammond organ, Carmel's gritty harmonies, and its down-and-dirty, three-guitar weave. "Dear Veronica," begun by Eric Clapton and Whitlock in the aborted sessions for Derek & the Dominos' never completed second album, lands Willie again to stylize Veronica Lake's cinematic allure into sonic sepia tones. That would close most LPs, but Lovers ends with Whitlock tearing out a piece of his heart to match his past, "Layla" slowed and saxed, built from comfort not for speed, and attacked with gusto by its guitarists forgoing the song's majority coda for fireworks its original guitarist has favored for decades. Clapton never reworked a love like this. (Saturday, March 15, Cedar Door, 8pm.)