It's the End of the World as We Know It

For those of you in town for South by Southwest who didn't get the memo, 2008 is the Year of Austin Music. Seriously.

Mayor Will Wynn made an official proclamation to City Council declaring such on Jan. 31. At first glance, this appears to be yet more local jingoism heralding the rise in national prominence of Austin (and SXSW showcasing) artists, ranging from Roky Erickson and Okkervil River to Grupo Fantasma and the Octopus Project, perhaps even more pompous than Bat City's official slogan as the "Live Music Capital of the World."

Reality is quite the contrary. The past 12 months have been marked by tumultuous change here in the capital, led by the June formation of Transmission Entertainment. The Red River-born booking and event-production venture, responsible for the new, annual Fun Fun Fun Fest and Saturday's Mess With Texas 2 free-for-all in Waterloo Park, has made tidal waves on the live music venue strip, acquiring punk staple Red 7 and renovating both Mohawk and neighbor Club de Ville, along with the Eastside's Scoot Inn, all of which are official SXSW venues. Lollapalooza and the Austin City Limits Music Festival promoter C3 Presents, meanwhile, extended its booking empire to include 20 additional Harrah's Casinos and both Solider Field and the Congress Theater in Chicago, as well as our very own and revered Emo's. 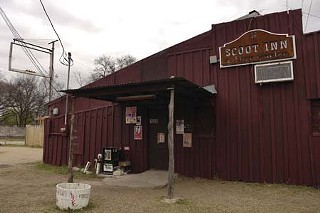 Take a look around. The entire landscape has shifted, moving toward high-rise condominiums, like the Red River Flats towering over Stubb's or the sky-scraping 360 next to the newly renovated Austin Music Hall, (pictured far right), and highlighting the city's conflicted interest in both Downtown growth and a music-driven economy. If anything, the proclamation was a distress call, a fledging promise not to let live music fall by the wayside.

Of course, Austin isn't isolated in these issues. The entire music industry is struggling with the paradigm shift into the Digital Age, with revenue down across the board. Artists from Saul Williams to White Denim are experimenting with new distribution methods, while labels are increasingly emphasizing licensing agreements and 360 deals that blur the distinction between bands and brands. Now in its 22nd year and currently the most influential confluence of music, trade, and business, SXSW also continues to evolve, expanding into a record-high 75 venues, including the Bat Bar and Lone Star Lounge in the Austin Convention Center for SXSW Live on DirecTV. 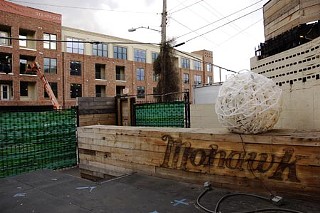 "It's not like we have a lot of control over the growth," admits SXSW Managing Director Roland Swenson. "It's more so a question of how to manage it. A lot of people are coming here that aren't directly related to what we're doing. What are we supposed to do, build a fence?"

As the ratio between bloggers and musicians continues to level out, and in a culture where talk show hosts determine The New York Times' bestsellers, it's no surprise that celebrities like Rachael Ray and Perez Hilton are crashing the party and generating plenty of buzz in doing so. Likewise, L.A.'s Viper Room establishes its March headquarters at the Orchid. Hip radio stations like Seattle's KEXP and Santa Monica's KCRW broadcast once more from the front lines, joined on the airwaves this year by NPR and Minnesota's the Current, streaming continuous coverage from the parking lot on the corner of Seventh Street and Red River.

Aside from the ever-increasing and noticeably better organized proliferation of coattail-riding day parties and pirate productions, the biggest growth for SXSW has come from afar. Nearly one-third of the 1,500 showcasing artists this year are carrying visas, a record high on both fronts. (Scope the Chronicle's International Supplement for a full breakdown of 2008 talent: March 7, 2008.)

"That's partly due to the weakening of the dollar," Swenson observes, "but it obviously means that people are still finding it of value to come here."

The success of SXSW, according to Swenson, however, still starts at home.

"I don't have any illusions about the Festival going on forever," he says. "It could easily collapse. This Festival was built on the cooperation of people in Austin and all over, and that cooperation is a little harder to maintain every year."

In 2007, SXSW was responsible for generating $95 million for the local economy, more than twice the amount previously estimated by the Austin Convention & Visitors Bureau, according to an economic impact analysis conducted by Angelou Economics and commissioned by SXSW. The Festival also produced $12.8 million in media coverage.

You can't turn a corner in Austin, especially during SXSW, without confronting some remnant of its storied musical legacy, be it the Stevie Ray Vaughan statue near Auditorium Shores or the newly minted Austin Music Memorial at the Long Center for the Performing Arts, honoring Doug Sahm, Kenny Dorham, and Grey Ghost Williams, among others. For going on three decades now, the Chronicle has painstakingly traced the sound of Austin music, documenting its transition from a cosmic country and blues bunker to the glory days of Trance Syndicate and well beyond. Now there's something that ties it all together. The Austin Music Database (austinchronicle.com/amdb) is an online encyclopedia providing background information and select discographies for local legends like Janis Joplin and Daniel Johnston to the current toasts of the town (the Strange Boys, Black Joe Lewis). AMDB automatically links each individual artist with the respective features and reviews the Chron has published online since 1995. Nearly a year in the making, AMDB currently features profiles for 399 artists, beginning with Randy "Biscuit" Turner of the Big Boys. From the birth of Texas psychedelia (13th Floor Elevators, Bubble Puppy, Shiva's Headband) through its current revival (the Black Angels, Horse + Donkey), no stoners are left unturned. There's even a few one-man bands thrown into the mix (Scott H. Biram, John Schooley, Possessed by Paul James) and a few outlaws we're claiming as our own (Buddy Holly, Waylon Jennings, Roy Orbison). It's the perfect, catchall study guide for the Rhino Musical Aptitude Test, 305 multiple-choice questions being administered on Friday, 3pm, at the Austin Convention Center in conjunction with annual Flatstock poster-art presentation.

10 SXSW artists to catch up with: