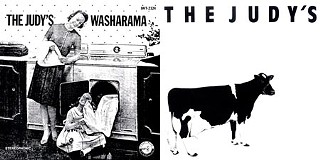 
Squeaky clean yet savagely irreverent, the Judy's epitomized adolescent New Wave existence at the cusp of the 1980s. Formed in 1979 in the Houston suburb of Pearland, the Judy's were a high school rock combo that eschewed swagger. David Bean's guitar remained undistorted, Jeff Walton's basslines bubbled, and drummer Dane Cessac sometimes traded his trap kit for pots and pans. Wildly popular throughout Texas, the Judy's might have achieved national traction if they hadn't temporarily disbanded in 1982. After more than a decade in out-of-printsville, 1981's debut LP, Washarama, retains a bop-happy bite that transcends nostalgia's sterilization. Despite a minimalist approach that strips the instrumentation of "Her Wave" and "All the Pretty Girls" down to just bass and drums, both nail their respective portrayals of geek longing and disdain in a timeless manner. Then there's "Guyana Punch," a smart commentary on the Peoples Temple mass suicide that became a water-drenched highlight of the trio's live shows. The Washarama reissue includes 1980's Wonderful World of Appliances EP, featuring the Univox synthesizer sing-along "Vacation in Tehran" and would-be Three Mile Island dance craze "Radiation Squirm." The threesome reconvened for 1985's Moo, which built on Washarama's solid base with a five-minute synth-pop paean to milk and the tuba-girded "Don't Be a Hippie." Bean's 1985 solo EP, Modomusic, rounds out the reissue with the pep-pop of "Marsha's Car" and the unexpectedly moving closer, "Keep Breathing." While Washarama spins the definitive Judy's, both albums are essential Texas-music artifacts. (Wednesday, March 12, Austin Music Hall, 9:30pm.)