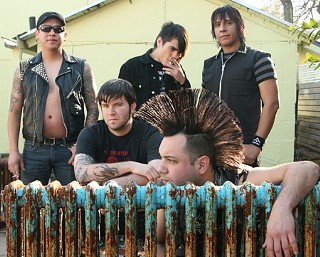 Like a glass of vodka flung into your eyeballs, the Krum Bums' take on punk rock burns. With last year's 33-minute buzz bomb, As the Tide Turns (TKO), the road-hogging local quintet set itself apart from genre conventions with a combination of transcendent loud-fast ferocity and adventurous nods backward to Motörhead and Saxon.

On a lazy Sunday afternoon at Rio Rita, the Krum Bums are trying to settle into their first extended period of downtime after two years of near-constant touring. Bassist Javier Vigil has been a married man for less than 24 hours, and everyone is still bleary-eyed from Saturday's Elvis-led wedding ceremony at Emo's Lounge.

"Yeah, well, it was a wild night," returns Vigil.

Rolling with constant back-and-forths like that becomes a survival skill when you're living and working out of a van for weeks on end. Like many battle-tested brothers in noise, learning to thrive in hostile environments has made peace and quiet anathema to them.

"I don't know how to live at home anymore," says Rodriguez. "I tend to just get in trouble. I'm like one of those Vietnam soldiers who wants to just keep going back."

"I had to unenroll from high school twice to go on tour," he notes.

Drummer Tommy Gonzalez rounded out the current lineup in 2005.

Although Rodriguez contends the band's primary musical mission in its early days was "to play and get free drinks," that changed as the band consumed more time and energy. The addition of Metallica fan Hall jump-started their evolution beyond the three-chord basics. "We wanted to write some heavy guitar stuff," says Martinez. "Just because it's punk doesn't mean it can't be a little fancy and a little edgy."

This summer the Krum Bums hit the road again for another nationwide tour and their first Japanese trek with Extinct Government. They'll also be releasing the vinyl- and online-only S.O.S. EP.

"We wrote a comic for the vinyl gatefold," Martinez notes. "It's going to be our story. Us at our crappy jobs. Zombies taking over our show, and we have to get out before last call. That kind of thing."