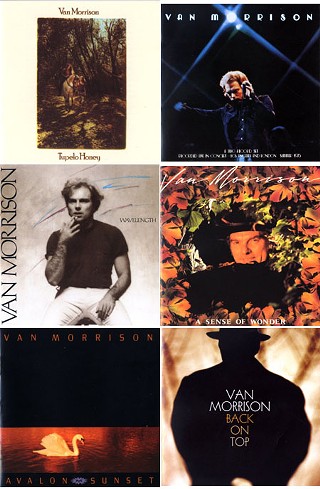 It's Too Late to Stop Now (Exile/Polydor/Universal)

A Sense of Wonder (Exile/Polydor/Universal)


Van Morrison's upcoming second effort for Lost Highway follows its own advice: Keep It Simple rolling deceptively loose yet on target, a disc that once sunk-in you'll return to overtime. Twenty-nine of the Irish mystic's album titles intersect that point with varying degrees of stamina, beginning with the main harvest from this first batch of six reissues, 1971's randy Tupelo Honey. Fourth of Morrison's first five Warner Bros. blockbusters – 1968's Astral Weeks through 1972's Saint Dominic's Preview – Tupelo Honey opens with the wind in its hair ("Wild Night") and never looks back, romping through "Old Old Woodstock," to quote its sequential track predecessor, "Like a Cannonball." Morrison's swollen throat rivals Otis Redding's for absolute stoned soul. 1974's It's Too Late to Stop Now pauses for a polite but pristine 2-CD live set from London and L.A., its "Saint Dominic's Preview" divine. 1978's Wavelength swooshes with its title track but flatlines on material, while the sincere but lightweight A Sense of Wonder (1984) never out-gospels the titular centerpiece and its bonus alternate. Avalon Sunset closes Morrison's 1980s on heavenly notes: "Whenever God Shines His Light," a duet with Cliff Richard; the indelible string schmaltz of "Have I Told You Lately?"; two-minute reminiscence "Coney Island"; the brown-eyed seduction of "Orangefield"; and a leisurely bonus stroll through "When the Saints Go Marching In." 1999's Back on Top finds the Belfast buckaroo's voice in peak form on generic material, save for "Philosopher's Stone," title of the previous year's superlative 2-CD compilation of unreleased material from 1971 to 1988. A miserly one or two extra tracks per remaster usually includes the LP mainstay, and as Van Morrison's catalog continues reissuing forth, mainstay albums multiply. (Van the Man plays the Austin Music Hall Tuesday, March 11.)

(It's Too Late to Stop Now)

(Wavelength; Back on Top)

(A Sense of Wonder) 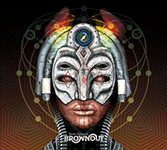