Everything you see at Trailer Space Records (1401-A Rosewood) is available for purchase. Aside from an assortment of used vinyl and CDs, as well as posters and T-shirts printed by Bearded Lady, that includes a bag of donkey-bread mix, a can of cream of chicken soup, and condoms. "My store is a bit more rock & roll," says owner Spot, a former Waterloo Records clerk, whose tune has changed much since his original plans to open the shop on the corner of Pedernales and Cesar Chavez fell through last year (see "TCB," Nov. 24, 2006). Located next to East Side Pies, Trailer Space opens its doors Friday with an in-store performance from the Strange Boys. A series of shows is also scheduled for SXSW. "There's room in this town for another record store," insists Spot. "I have to focus on what I know best, and that's local music." Representatives from Austin's more established retailers, including Waterloo Records, End of an Ear, Encore Records Video & Apparel, and MusicMania, recently took part in a digital roundtable discussion on new indieconomics. Check it out at austinchronicle.com/earache.

The Daniel Johnston-inspired rock opera Speeding Motorcycle at Zach Scott Theatre is a ticklish romp through the artist's vision and obsessions, like simultaneously listening to his tapes and flipping through his comic sketches, only better. On Friday, the encore to the Jason Nodler-directed musical, which runs through April 13, actually occurred outdoors on one of the building's patios, as the cast and stacked house band played Johnston songs not included in the production, including a Kathy McCarty-led rendition of Johnston's very first composition (see "Continued Story," McCarty's production journal). The artist's scheduled appearance and performance on Saturday was postponed indefinitely due to illness. Golden Bear, Belaire, Transmography, and a few other local acts put their own spin on Johnston's songbook Tuesday at the Parish, culminating with the premiere of Danny & the Nightmares' new video for "Death of Satan," directed by Jose Jones.

"There's a lull in the American music market right now, and historically, one of the things that usually kick-starts that is British music," surmises Crispin Parry of London's British Underground and Rock Over London. Beginning in 2002 with a small showcase at the Austin Convention Center, the publicly funded British Underground has worked in partnership with UK Trade & Investment to present British music at South by Southwest, providing grants and promotional platforms to artists. "With more than 150 bands performing and over 1,000 delegates attending, there's a British accent on the festival," chuckles Parry. Establishing its March headquarters, dubbed the British Music Embassy, at Latitude 30 on Fifth Street, the new empire hosts a series of UK-centric SXSW showcases, while daytime musical activities are devoted to like-minded agencies representing Liverpool, Scotland, and Wales, the latter boasting Duffy and Los Campesinos!. The campaign commences on Thursday, March 13, with the annual British Music @ SXSW Brush Square BBQ, previously host to Amy Winehouse, James Blunt, and Paulo Nutini. "It's not really about the arts or culture," Parry admits. "It's about trade, exporting goods to the rest of the world." Find the Chronicle's breakdown of the UK roster in this week's SXSW 08 International Bands Supplement.

• R.E.M. is confirmed as the first taping of Austin City Limits' 34th season, scheduled for March 13, the afternoon after the trio's SXSW showcase at Stubb's. For the third consecutive year, Seattle's KEXP broadcasts live from the KLRU studios on the Friday and Saturday of the Music Conference. Scheduled performances include Devotchka, the Breeders, the Raveonettes, and Blitzen Trapper, among others, and are open to the general public. See austinchronicle.com/earache for the complete lineup.

• Don't be surprised if Tom Jones pops up at 2008's Austin City Limits Music Festival. C3 Presents is now booking and promoting 20 Harrah's Casino Hotels across the country, with the noted exception of Las Vegas, while last week the Chicago Park District Board of Commissioners inked a five-year, $50 million deal with the local promotion venture and new partners SMG, allowing them to manage landmark stadium Soldier Field. C3 head Charles Attal nabbed Independent Promoter of the Year at the 19th annual Pollstar Concert Industry Awards, and Amy Corbin became the first woman to win Nightclub Talent Buyer of the Year. 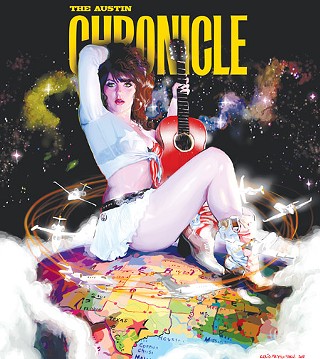 • Quick. What Lone Star songwriter played alongside Little Richard and Jimi Hendrix and was covered by Eric Clapton, B.B. King, and Delbert McClinton? If you answered Jerry Lynn Williams in less than 12 seconds, be sure to sign up for the Rhino Musical Aptitude Test, 305 multiple-choice questions being administered Friday, March 14, 3pm, at the Austin Convention Center in conjunction with annual Flatstock poster-art presentation. Roky Erickson hosts, and the winner takes home 100 essential reissues and a spot on Rhino's mailing list for life. The reissue kingpins also sponsor the Lemonheads Wednesday, March 12, at Emo's Annex as Evan Dando and company relive 1992's It's a Shame About Ray in its entirety, commemorating its deluxe edition.

• After 13 years, influential Americana magazine No Depression, which heralded Alejandro Escovedo as Artist of the Decade in 1998 and was co-edited by Austinite Peter Blackstock, moves to a limited, online-only format following its May/June issue, due primarily to decreases in advertising revenue.

• Tia Carrera's monthly happy-hour jam session this Friday at Room 710 doubles as a benefit for the locals, who needs help getting to the 13th annual Roadburn Festival, April 17-20, in Tilburg, Holland. The psychedelic improv trio is scheduled to appear alongside international heavy hitters like Celtic Frost, Jesu, and Boris, not to mention Austin's Dixie Witch, whose bassist, Curt Christenson, is sitting in with Tia Carrera both here and abroad. The show is free, but donations are highly encouraged.