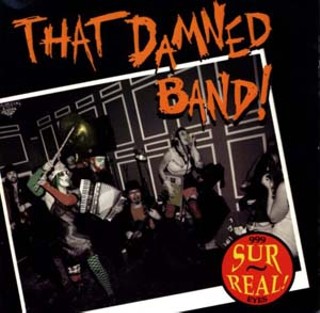 
That Damned Band is a peculiar animal. Cut from the same cloth as the White Ghost Shivers, Asylum Street Spankers, and Jolly Garogers – that is, bawdy delivery and performative schtick – the local sixpiece and their friends began as the sonic air conditioning for 999 Eyes, a human oddities freak show. On their hourlong debut, this self-described "dark carnival jug band" offers up acoustic tone poems about booze, Satan, hobos, snake pits, circuses, and pirates on washboard, resonator guitar, clarinet, accordion, sousaphone, etc. The band comes across here as they probably do live: disjointed at times, occasional sharps and flats, busy arrangements, vocals often shouted more than sung. Musically, they're skilled, but the band's overall effect is one of visceral entertainment, and it works; That Damned Band snagged a slot on The Tonight Show last year.