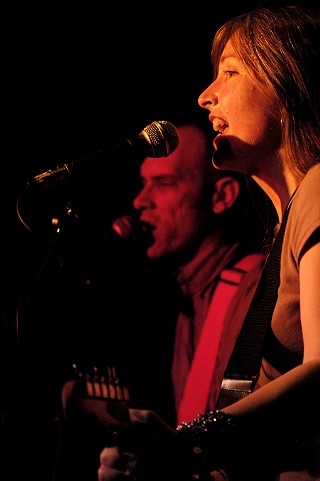 
As its original moniker suggests, the local band formerly known as Zeitgeist palpably encapsulated the spirit of its era. Saturday night's Reivers reunion at the Parish, the first of two performances at the Sixth Street venue, was a soaring, jangling step back in time to an Austin that had more in common with Athens, Ga., than Atlanta. You couldn't have summoned 1985 any closer without bulldozing the Silicon Labs building where Liberty Lunch once stood. After a short, workmanlike set of Britpop from the local Rite Flyers, the Reivers commenced their first public performance in 16 years before a sold-out crowd of old friends and fellow travelers. Opening with "Ragamuffin Man" from their 1987 major label debut, Saturday, the quartet took a few songs to find the pocket, but once they did, the years evaporated. The unique, wide-angled harmonic interplay between John Croslin's warm, West Texas baritone and Kim Longacre's unbridled theatricality re-emerged intact on "Electra" and the jaunty "Almost Home," later covered by Hootie & the Blowfish. Longacre's Broadway turn on the band's cover of "Lazy Afternoon" retained its fun kick, too. The elongated show hit high points when the band tore through "Araby" and "Things Don't Change" from 1985's Translate Slowly, though Croslin's evocative detour down Fort Worth's memory lane on "Star Telegram" retained its own "Disney Girls"-style charm. After closing the 75-minute main set with the melodic one-two punch of "In Your Eyes" and "Secretariat," the Reivers were called back for double encores. In true mid-1980s Austin fashion, they beamed their way through hip-pocket covers of Vince Guaraldi's "Linus & Lucy" and Thin Lizzy's "Cowboy Song" that sent the wizened faithful home smiling. And well before closing time, no less.