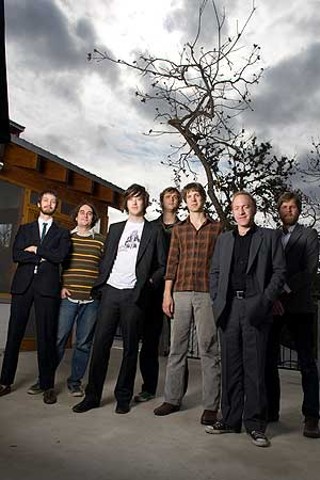 In what's already been dubbed "Rokkervil," Okkervil River (pictured) are headlining the 2007-08 Austin Music Awards, scheduled for Wednesday, March 12, at the Austin Music Hall, alongside Roky Erickson. With Roky hot to guest with Will Sheff's crew, it should be the wildest collaboration since Mudhoney and Jimmie Dale Gilmore. Credit former Chronicle music newsman Chris Gray with the brainstorm. "Will Sheff was really into the idea," relays AMA director Margaret Moser, "though I have no idea what songs they're going to do." Here's hoping the Black Sheep Boys tackle "I Walked With a Zombie." Also confirmed for the evening is a Gary Clark Jr. showcase and a six-string salute to Walter Hyatt led by David Ball of Uncle Walt's Band. Stay tuned.

• Tina Marsh went all out during her performance last Thursday at Spazio, benefiting Planned Living Assistance Network of Central Texas, so much so that the local jazz queen and Creative Opportunity Orchestra founder woke up in terrible pain at 4am the following morning. Doctors informed Marsh that her cancer had returned and metastasized to other parts of her body. She's currently undergoing radiation treatment. Financial donations can be made to Sally Jacques care of Blue Lapis Light at PO Box 1821, Austin, TX 78767.

• A quick moment of shameless self-promotion: OTR is now the host of The Next Big Thing on 101X, spinning four hours of new and local music every Sunday night beginning at 6pm. Tune in this week to hear fresh cuts from White Denim, Ghostland Observatory, Vampire Weekend, the Gutter Twins, Hot Chip, and much more. 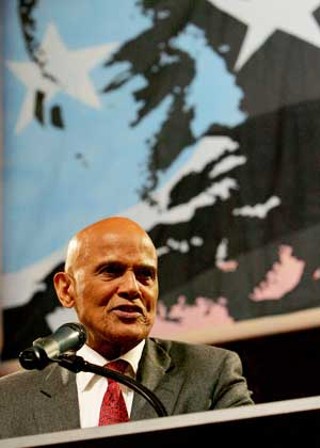 The King of Calypso, Harry Belafonte, delivered the keynote address for the Martin Luther King Jr. celebration at the River-bend Centre last Saturday night. The 80-year-old activist and entertainer, best known for "Day-O," "Jamaica Farewell," and Beetlejuice chorus line "Jump in the Line," spoke nonstop – without notes – for 45 riveting minutes, at one point recalling the last conversation he had in person with King. "I'm afraid we're integrating into a burning house," the civil rights leader warned Belafonte. Implored as to what people should then do, Dr. King's response remains pertinent still today: "We're going to have to become firemen."

Local voltaic dance rockers Electric Touch managed to secure a spot at the 2008 Coachella Valley Music and Arts Festival, April 25-27 in Indio, Calif., without so much as an album to their name. Event organizers Goldenvoice announced plans for an additional festival last week, All Points West, at Liberty State Park in Jersey City, Aug. 8-10, the same weekend as and a stone's throw away from C3 Presents' inaugural Vineland Music Festival. With Radiohead headlining All Points West and the Virgin Festival likely taking place concurrently in Baltimore, C3 decided to delay Vineland's launch until 2009, but don't be surprised if Thom Yorke and company make an appearance at C3's Lollapalooza, Aug. 1-3, at Chicago's Grant Park. In other festival news, a lawsuit was filed on Tuesday on behalf of Brown Distributing Co. and its four employees who were severely burned at the 2007 Austin City Limits Music Festival (see "Off the Record" Sept. 21, 2007) against New Braunfels' Evergreen RV Center and other entities allegedly responsible for the propane malfunction.

The lingering stench of smoke outside KOOP Radio on Monday afternoon underscored feelings of shock and confusion following the Austin Fire Department's Arson Investigations' announcement that Paul Webster Feinstein had been arrested in connection with the Jan. 5 fire that caused an estimated $300,000 in damages. A former KOOP volunteer and host of the jazz program Mellow Down Easy, Feinstein, who confessed to the crime, left the station in December after applying for a position as development director in late October and an unrelated dispute with another programmer regarding the music being loaded into the digital library. He faces two to 20 years in prison and a fine upward of $10,000 if convicted. "I'm a bit worried about morale," admitted KOOP President Andrew Dickens, standing amidst the wreckage. "We need to understand what happened here." KOOP returned to the airwaves last Friday, broadcasting from a studio space donated by Entercom Communications. A number of benefits are already in progress, including Soundcheck magazine's Monday night residency at the Beauty Bar and the Mutants Ball at Beerland Feb. 16, featuring the Pataphysics, Alright Tonight, and the Carrots. "We're moving forward and continuing to provide a voice not heard in mainstream media," said Executive Director Kim McCarson, who hopes to return to the KOOP studios on Airport Boulevard in about three months. "We're going to clean up and recover from this."