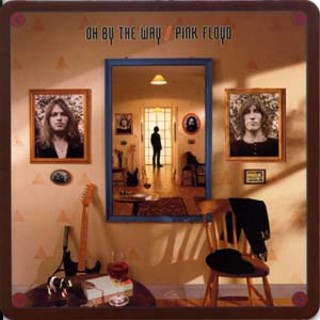 Oh by the Way (Capitol/EMI)


Trapped in a mirror on the front of Oh by the Way, the late Syd Barrett's shadowy influence lingers long after his estrangement from Pink Floyd following the UK quartet's playfully psychedelic 1967 debut, The Piper at the Gates of Dawn. Housing the band's complete studio album discography, remastered and repackaged as miniature replicas of the original LPs (posters and postcards included but no bonus materials), the 16-CD box set proves the proverbial window into Barrett's creation. His cryptic composition "Jugland Blues" closes the following year's A Saucerful of Secrets, an exploratory work that balances prismatic pop ("Let There Be More Light") with solar flares ("Set the Controls for the Heart of the Sun"), while Barrett's "Astronomy Domine" opens the powerful live half of double album Ummagumma, recorded in Birmingham and Manchester in June 1969. Then, of course, there's 1975's poignant tribute to the departed founder, Wish You Were Here. The transitory light-years preceding Floyd's conceptual masterpiece, 1973's Dark Side of the Moon, mark where things then get interesting. Floyd's oft-forgotten art film soundtracks, 1968's More and Obscured by Clouds in 1972, are fascinating sketches of mood and tone, particularly the former, delving into distorted, acid-psych ("The Nile Song," "Iziba Bar"), avant-jazz instrumentals ("Up the Khyber"), and pacifying acoustic ballads ("Green Is the Colour"). Individual character studies from Ummagumma begin to unify during the symphonic splendor of 1970's Atom Heart Mother, but it's not until the epic "Echoes" from the succeeding Meddle (1971) that all the elements of Floyd's futuristic vision coalesce. After that, group co-founder Roger Waters scores his trifecta: 1977 Orwellian treatise Animals, the monumental, if overrated, capstone double album, The Wall, and his largely lyrical and tyrannical manifesto, The Final Cut. The fallout from his departure manifests in 1987's lackluster A Momentary Lapse of Reason, dominated by David Gilmour's guitar-centric power ballads. 1994's The Division Bell actually rings more true, lacking the 1980s production pretensions and featuring more versatile, reflective songwriting. The only thing missing here is the band's coda Relics, compiling early rarities and singles. Otherwise, shine on.