Considering the rising Red River Flats condominiums and the booking battle taking place between the two venues at extreme ends of the strip, the Red River Entertainment District is starting to resemble a hotly contested game of Monopoly. While no ink has officially dried, Transmission Entertainment is close to purchasing Red 7 (see "DIY or Die," June 22, 2007), although head talent buyer Graham Williams declined to comment. Emo's owner Frank Hendrix, who in turn is investing in Sixth Street bar Bourbon Rocks, initially showed interest in the property, but the owner was reluctant to sell at that time. "I wanted to make it happen," Hendrix said last August. "Red 7 reminded me of what Emo's used to be, a crusty punk rock club." Transmission has been booking shows there since September, and the local promotion venture has already secured the Vandals' only Texas appearance (March 1), along with upcoming dates for Converge and JFA in April. Rumor has it that a Hot Water Music reunion is also in the works for an unofficial day party during South by Southwest. Expect the walls to shake this Friday for the Don't Tread on Me showcase, a protest against the proposed amendments to the current Austin sound ordinance, featuring the Bread, the Stones We Throw, Like Dogs, Rend, and the Anchor. "The play is essentially the dramatization of his psyche, dealing with the iconic figures from his drawings and songs," says Kathy McCarty of Daniel John-ston-inspired rock opera Speeding Motorcycle. "It's all pretty trippy." Following two successful stints in Houston in 2006, rehearsals began on Monday in Austin for the local edition, which is scheduled to run Feb. 14-April 13 at Zach Scott Theatre. One of the first local musicians to recognize the depth of Johnston's oeuvre with her celebrated 1994 tribute, Dead Dog's Eyeball, the Glass Eye guitarist and Chronicle Food writer will be appearing as an angel, a nurse, and a skeleton, among other iconic characters, and closing the show with a duet of the unreleased Johnston tune "Loving Feelings." Rounding out the house band for the performance are the Meat Purveyors' Bill Anderson and Sherry Lane, Terri Lord, and members of the Invincible Czars, all of whom will appear at some point as Joe the Boxer. "I regard him as a universal figure," says director and creator Jason Nodler. "We all have the conditions that Daniel has; the volume is just turned up for him." 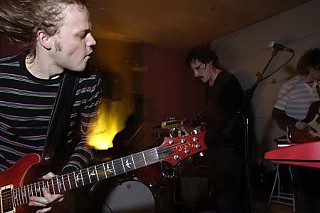 Burning down the house: The Black & White Years at the Beauty Bar, Jan. 17 (Photo by Sandy Carson)

Only seven people attended the Black & White Years' official SXSW showcase last year at Opal Divine's, but as fate would have it, that included Velvet Revolver shredder Slash and former Talking Head and Modern Lover Jerry Harrison. "He came to our house, and we played a set for him in our living room, two nights in a row," recalls singer/guitarist Scott Butler of the latter. A month later, the Austin art-punk quartet was in California's Sausalito Sound studio with Harrison and Heartbreakers drummer Steve Ferrone, hammering out the follow-up to the B&WY's debut EP, Real! In Color! "When we walked in, they were remastering the Talking Heads catalog for 5.1 surround sound," recalls keyboardist/guitarist Landon Thompson. "David Byrne's guitar was bouncing around the room." The resulting eponymous LP, to be released by Houston's Brando Records at Stubb's on Feb. 22, carries all the Heads' trademarks: scattershot guitar, snaking synths, and quirky, hyperintelligent lyricism. This weekend the band tries its luck at the European counterpart to SXSW, the 2008 MIDEM conference in Cannes, France. "We're too broke to be overwhelmed," Butler concludes, "but things are looking good." Rob Sheffield's Love Is a Mix Tape: Life and Loss, One Song at a Time is an emotional tribute to his late wife, explored through the music the two shared ("Rock & Roll Books," Nov. 30, 2007). The Rolling Stone contributing editor sent OTR his most recent playlist, which includes Spoon's "The Underdog." "It's actually not easy to imitate Billy Joel, not without sounding like Springsteen or Harry Chapin or somebody," Sheffield writes of the song. "But this sounds so precisely like B.J., from the lyric to the acoustic guitar to the way the singer says, 'riiight.' I have to assume this is fully intended as yet another scene from that Italian restaurant." View the annotated playlist at the Off the Record blog (austinchronicle.com/earache), and catch Sheffield at BookPeople on Sunday, Jan. 27, 5pm.

Erase Errata, "He Wants What's Mine," Spoon, "The Underdog"

Fleetwood Mac, "What Makes You Think You're the One"

"Condominiums, condominiums, and more condominiums. And they sure don't want any hippie singers there. They just tear down everything and build a condominium that I can't live in, and I don't know anybody who can afford to live in." That's part of the reason why local musician Troy Dillinger is campaigning for City Council to proclaim 2008 the Year of Austin Music. "It's an upside-down pyramid, where the city of Austin enjoys high amounts of revenue generated by musicians, but those musicians and venue owners aren't seeing any of the benefits," says Dillinger, who's calling a town hall meeting on Monday at the Austin Moose Lodge (2103 E.M. Franklin) to discuss the organization's five-tier plan of action. "It can't go on many more years in the state that it's in."

• Six months after Stephen Bruton's return at Road to Austin following his bout with throat cancer, the local guitarist is receiving additional treatment at M.D. Anderson in Houston. According to manager Ken Kushnick, the procedure is only a precautionary measure and should not slow down Bruton, who proceeded with his weekly residency at the Saxon Pub with the Resentments last Sunday.

• This is the last week to cast a ballot for the annual Austin Music Poll. Get it done.

With the Chronicle's music cyberspace station firmly established, our staff is revamping its blog log beginning this week. Every weekday brings a weekly post from the roster at right, with additional roving posts from yours truly, OTR; Raoul Hernandez's Death Valley Nights; and Audra Schroeder's Schadenfreude: austinchronicle.com/earache.