A Gathering of Promises 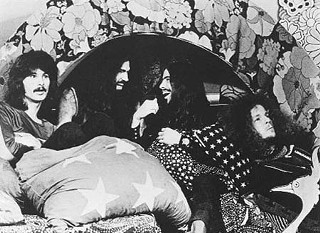 Not long after the initial publication of the 2008 Austin Music Poll ballot, Bubble Puppy guitarist Todd Potter contacted the Chronicle music staff in hopes of an honorary (and overdue) induction into the Austin Music Hall of Fame. To quickly recap, Bubble Puppy crafted one of the most torrid singles from the psychedelic era, "Hot Smoke & Sasafrass," which peaked at No. 14 on Billboard's Hot 100 and landed the Corpus Christi-bred quartet on American Bandstand. The band's lone album for Houston's International Artists, 1969's A Gathering of Promises, was a radical rendering of post-British Invasion Texas-psych: pastoral harmonies, airtight rhythms, and a dual guitar front that was rivaled at the time only by the Allman Brothers Band. According to Potter, bassist Roy Cox is currently in rehab after breaking two vertebrae in his neck on Thanksgiving, while drummer David Fore suffered a seizure in mid-December. Both are expected to make full recoveries. "If I could get the guys together and do reunions to put ourselves back on the map, I would, but with each passing year, it seems less doable," says Potter, who last played with the Puppy in 1987, resulting in the oft-forgotten Wheels Go Round. "I'd really like to see it while we're all still here." The band's a shoo-in for next year's Music Poll ballot, while this year's Hall of Fame nominees await your vote.

• With the South by Southwest Music Conference, it's not the bands you know but the ones you'll discover. After all, Beck once played to a handful in Emo's front room, and the Strokes ransacked the Iron Cactus. That said, Dolly Parton is confirmed to headline the Austin Music Hall on Friday, March 14, in support of her aptly titled Backwoods Barbie. UGK's Bun B is presenting a tribute to Pimp C, while David Banner, Q-Tip, N.E.R.D., and Dizzee Rascal round out what promises to be a strong delegation of hip-hop. Other acts signed on for March madness include Mick Jones' Carbon/Silicon, My Morning Jacket, the Donnas, Jens Lekman, Shelby Lynne, the Cool Kids, and Delta Spirit.

The Man Who Fell to Earth Since overcoming his bout with hepatitis C, Alejandro Escovedo (pictured) has been caught in a suspended state of self-reflection, a sentiment that defined his 2006 John Cale-produced comeback, The Boxing Mirror. For his Iggy Pop-inspired new album, Real Animal, due June 24 on Back Porch, the local luminary takes things one step further. "It tells the story of my life in music, starting in San Francisco on through Rank & File and the True Believers," says Escovedo of the album, which he wrote with former Green on Red axe man Chuck Prophet and which was helmed by Tony Visconti, mastermind behind classics from David Bowie, T. Rex, and Thin Lizzy. (Originally tapped producer Glyn Johns in turn handled Ian McLagan's latest, Never Say Never, at London's Sphere Studios). Known for his balance of blockbusters (Silence of the Lambs, Philadelphia) and concert films (Stop Making Sense, Neil Young: Heart of Gold, Storefront Hitchcock), filmmaker Jonathan Demme is applying a similar technique for his Escovedo documentary, scheduled to begin shooting next month at Las Manitas. "The plan right now is for me to watch my life unfold as a spectator to a battle of the bands where groups are portraying various phases of my career," Escovedo relays. "I started in a fictitious band, the Nuns, for a film I was making on the world's worst band, which we became, so this brings things full circle." Escovedo worked with the director on the score to Demme's new Jimmy Carter documentary, Man From Plains, collaborating with Nigerian violinist Djamel Ben Yelles and revisiting Gravity's "By Eleven." "I really felt a connection with Carter's compassion and honesty, his grounding to the earth," Escovedo concludes. The film doesn't open in Austin until Feb. 15, but Escovedo hits the Cactus Cafe on Saturday and holds down Tuesday nights at the Continental Club, where Prophet plays Jan. 25.

Quite rarely is one man's clutter actually another's gold, unless, of course, the man in question is the late Tary Owens. One of Texas' most important musicologists and one of 10 inaugural inductees to the Austin Music Memorial, Owens chronicled the history of the local Chitlin' Circuit (see "Juke Joint Blues," July 13, 2007) and the early Austin folk scene. University of Texas' Center for American History recently obtained Owens' collection for $22,000, adding to an already stellar legacy that includes Owens' Catfish Records and recordings completed during his tenure at the school between 1963 and 1966 (Powell St. John, Freddie King, and Mance Lipscomb, among others). The holdings fill 44 storage boxes and contain everything from original artwork from Roky Erickson and Jim Franklin and early recordings and yearbooks of schoolmate Janis Joplin to a documentary of Roosevelt "Grey Ghost" Williams and field recordings from Texas prisons. "I'm still finding stuff lying around the attic, all of these bits of music history," recalls Owens' widow, Maryann Price. "It's a miracle that we have the technology to watch these people now, to study the way they moved and how they sounded. I'm happy it's all in a safe, climate-controlled environment." Resident music archivist John Wheat hopes to have the materials ready for public use in a matter of months. "The further you dig, the more you uncover," he says. "It's the small details that tie everything together that make this project so rewarding." 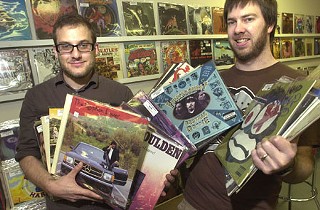 Tough time to own an independent record store. Album sales dropped another 17% in 2007, while Sony recently became the last of the four major labels to sell its music digital-rights-management-free at Amazon.com. There was plenty to celebrate, however, last Friday night as DJs Starsign and NickNack broke in the ones and twos at Backspin Records' new location on Airport Boulevard, in the space previously occupied by ABCD's. As its names suggests, Backspin specializes in vinyl hip-hop, separating records into categories like pre- and post-'85 and golden era. "The weakening of the dollar has made it prohibitively expensive to import some of the great dance music coming out of Europe," says co-owner Eric Wallenstein, who met his partner Zach Douglass at the Austin Record Convention, "but the vinyl is making a comeback. You can't beat the sound quality, feeling, and collectability of a record."