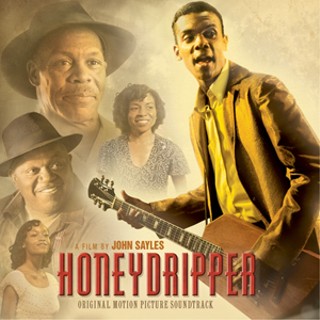 
In a pivotal scene during John Sayles' Honeydripper, an old-time jukebox blows a circuit in the club. What's appealing about this soundtrack is that nothing would sound out of place screeching at 45 rpm. Southern gospel (New Beginnings Ministry's "Standing by the Highway" and "You Got to Choose"), early country (Hank Williams' classic "Move It on Over"), Appalachian folk ("Tall Cotton"), and piano blues (Mable John's "No Matter How She Done It") underscore the film's pulling at the roots of rock & roll. Atlantic Records pioneer Ruth Brown waxes nostalgic on the weary "Things About Coming My Way," her final recording, while Lil Green's raspy, vaudevillian "Why Don't You Do Right" provides an unexpected highlight. Danny Glover fares about as well on "Goin' Down Slow" as Samuel L. Jackson did for Black Snake Moan, paling in comparison to Keb' Mo's Delta-drenched "Stack O Lee." Only Austin's Gary Clark Jr. is capable of shooting the lights out, however, scoring a trifecta with the Chess Records swing of "Good Rockin' Tonight," the Sayles-penned "China Doll," and standard "Blue Light Boogie." It's the future filtered through a lens of the past.