In the "Indie Rock Universe," as illustrated by Rolling Stone in its Nov. 15 issue and enclosed in four pages of Camel cigarette advertisements, Ghostland Observatory and White Denim inhabit "Spazmodica," where "interstellar weirdos fly high." Other capital city acts sprinkled throughout the controversial, Douglas Adams-inspired foldout include Explosions in the Sky, the Octopus Project, Iron & Wine, and Spoon, now part of the "Northwesteroids." Last week, on behalf of the 186 entities name-dropped in the display, Xiu Xiu and Canadian noise patrol Fucked Up filed a class-action lawsuit against Rolling Stone's parent company, Wenner Media, and Camel's R.J. Reynolds Tobacco Co. for the allegedly inadvertent, unsolicited association with the tobacco company. None of the local bands has thus far expressed interest in joining the suit.

While the relationship between indie rock and Big Tobacco may seem paradoxical, it was par for the course in 2007 as major corporations from Taco Bell and Wendy's to Greyhound Lines and Scion increasingly used alt-rock artists (occasionally without permission) as a way to tap into a younger audience. Cases in point were the unofficial day parties during the South by Southwest Music Festival in March, which played out like an experiment in multimedia, blitzkrieg promotion. A few months later, the sponsor-driven, free Ozzfest tour rolled into the Verizon Wireless Amphitheater. Toyota Yaris and Levi's brought the Ice Cream Man back to September's Austin City Limits Music Festival, while Dell Lounge hosted both a stage and the Sound and the Jury competition.

Ironically, Camel's the Farm – not to be confused with BFG Communications, the advertising firm hired by Camel to promote the Flaming Lips' smokescreen extravaganza at La Zona Rosa – did more to support homegrown music this past year than most would care to admit. The organization helped sponsor Beerland's inaugural Ground Zero Texas garage-punk festival last month, not to mention countless other shows, both national (last weekend's double bill of the Walkmen and These Arms Are Snakes at Emo's) and local (the Golden Boys, the Laughing at Mohawk). In the short term at least, everybody wins: There's no cover, the bands get paid well, the venues cash in at the bar, and those seeking free smokes can conveniently sign their life away to the death merchants.

The point is that the paradigm shift into the Digital Age has forced every aspect of the music industry to adapt or face extinction. All the rules have changed, and everyone is experimenting with new revenue streams. Radiohead sent shock waves through the biz with its pay-what-you-will self-release of In Rainbows online in October, and Beck recently became the first artist nominated for a Grammy for an iTunes-only single, "Timebomb." Marquee artists like Joni Mitchell and Paul McCartney gravitated toward distribution networks with built-in audiences (Starbucks' Hear Music), whereas the Eagles released its disappointing double album, Long Road out of Eden, exclusively (and fittingly) through Wal-Mart. Then there's RCRD LBL, a new ad-generated, online-only division of Downtown Records (and home to White Denim) that's primarily emphasizing music publishing and licensing agreements. 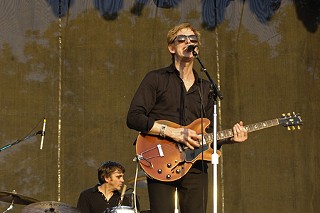 Even the landscape is experiencing a period of drastic change. Last Thursday, Broken Spoke announced that Ardent Residential and Direct Development purchased its 7-acre lot on South Lamar, which will be developed into apartments and retail outlets around the historic honky-tonk. The Block 21 complex (and future home of Austin City Limits) broke ground in October, and bottle-service nightclubs are beginning to spread like crabs. The construction of Red River Flats, a four-story, 124-unit condominium complex next to Stubb's, meanwhile, casts an ominous shadow over the entire Red River Street Entertainment Area as debate over amendments to the current sound ordinance continues to heat up.

All that said, it was a pretty amazing year for local music. Aside from the obvious efforts by those in Rolling Stone's "Indie Rock Universe," Okkervil River penned its sharpest pop album to date; offshoot Shearwater received deluxe reissue treatment courtesy of Matador. Prince rolled out the red carpet for Grupo Fantasma, who held down a residency at Club 3121 and recorded a BBC Radio session, while the group's instrumental side project Brownout delivered the sleeper hit of the year with Homenaje. Roky Erickson cemented his epic comeback saga on a rapturous Austin City Limits taping with ZZ Top's Billy Gibbons. The Black Angels descended upon the festival circuit and toured with Queens of the Stone Age. Voxtrot dropped its highly anticipated full-length debut on Playlouder. Smaller acts like the Lovely Sparrows, Peter & the Wolf, and Sparrow House all helmed Daytrotter sessions, and indie imprint Dead Oceans surfaced with four momentous albums.

Taken as a whole, the Austin music scene seems to be finally creating a new identity for itself in the 21st century, independent of its storied legacy as a cosmic cowboy and blues mecca and City Council's unofficial calling card, "live music capital of the world." Perhaps "Spazmodica" isn't too far off after all.