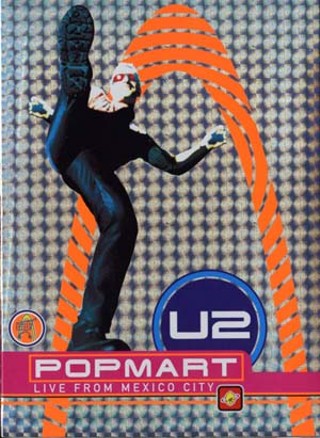 
"A monument to trash and supermarket culture," explains U2 manager Paul McGuinness during one of four superfluous documentaries on a second disc of extras. "That's why we called the tour 'Popmart.'" That doesn't explain why the Irish quartet is dressed like an electronica version of the Village People – cowboy, prizefighter, death-squad guerilla, unamused drummer – on its 1997 concert "spectacular." A segment on the tour's lemon, a disco ball from which the band emerges for the encore, provides snorts of embarrassment from the group, but no further rationalizations. Equally dated, Pop's disco beats can't smoke and mirror their compositional backbone of the two-hour set, "Gone," "Last Night on Earth," acoustic Bono/Edge duet "Staring at the Sun," "Please," and encore "Discothèque" highlighting the distracted circus onstage. Encore excerpts from shows in Rotterdam and Edmonton play more heartfelt, but by that point, the extravaganza has gotten old. Not so of Edge's solo rendition of "Sunday Bloody Sunday," less Pop than snap and crackle.