Respect Yourself: The Stax Records Story

Respect Yourself: The Stax Records Story


Dreams to Remember: The Legacy of Otis Redding


Following the narrative arc of author Peter Guralnick's Sweet Soul Music, directors Robert Gordon and Morgan Neville present the early history of Stax Records as Camelot in Memphis for their 2007 documentary, Respect Yourself. With the civil rights movement as a backdrop, black and white session musicians transform a movie theatre into "Soulsville," launching the careers of Otis Redding, Sam & Dave, and Eddie Floyd. Just as the label's fortunes crest in 1967 with Redding's extraordinary Monterey Pop performance, he and most of his backing Bar-Kays are killed in a plane crash. In 1968, Martin Luther King Jr. is assassinated just blocks from the Stax studio, poisoning the interracial dynamic. The rocky dissolution of Stax's distribution agreement with Atlantic didn't help. Isaac Hayes and the Staple Singers then lead the label's revival, culminating with 1972's Wattstax festival in Los Angeles. While Respect Yourself touches on behind-the-scenes milestones through interviews, vintage performance footage is what drives this bus. Bonus video of a pre-South by Southwest rehearsal at Austin's Music Lab with Floyd, William Bell, and Booker T. & the MGs seals the local angle. If you can live by music alone, the Stax/Volt Revue disc captures a reverie-inducing 1967 Norwegian TV performance by Redding, Floyd, Booker T., Sam & Dave, the Mar-Keys, and Arthur Conley. Interviews with Sam Moore, guitarist Steve Cropper, and trumpeter Wayne Jackson drive home what a big deal it was for a bunch of young guys from Memphis to embark on a European tour. Dreams to Remember, meanwhile, recalls Redding's meteoric rise and tragic demise through contemporary interviews and performance footage. Highlights include an immolation of "Satisfaction" taped in London with an undoubtedly nervous Mick Jagger in the audience and a red-hot version of "Respect" taped at a Cleveland TV station less than 24 hours before Redding's death. 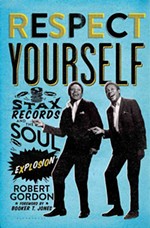 Respect Yourself: Stax Records and the Soul Explosion
At the crossroads of Memphis and Civil Rights stood Stax Records