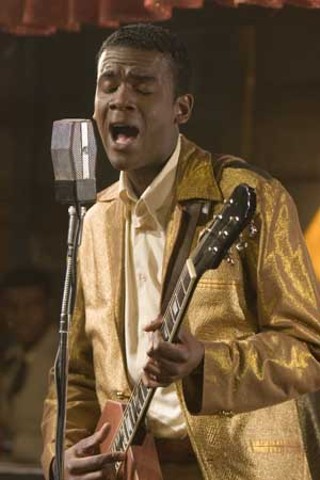 Austin's best-kept blues secret is coming to a theatre near you. Gary Clark Jr. stars alongside Danny Glover in Honeydripper, the latest from writer/director John Sayles (Lone Star, Men With Guns). Set during cotton harvest 1950, at the crossroads in Harmony, La., the film focuses on a struggling club owner while vividly portraying the birth of rock & roll as a meaningful, social confluence. Clark plays Sonny, who he describes as "a cat out of the Army, looking for his next meal, his next gig, and determined to hear himself on the radio." "I was a nervous wreck for the first few days, going over lines like 40 times," admits Clark, who met Sayles after a South by Southwest performance last year, "but acting is a lot like playing music in some ways. It's about painting a picture, telling a story, and stirring up emotions." Clark spent last summer making the rounds of the blues-festival circuit with the Honeydripper All-Star Band, featuring Stax and Motown Records veteran Mable John, keyboardist (and Glover hand double) Henderson Huggins, and Howlin' Wolf/Muddy Waters alumni, saxophonist Eddie Shaw and harpist Arthur Lee Williams, all of whom have roles in the film and appear on the original soundtrack, due Feb. 5 on Rhino. "The whole experience was like getting the privilege to jump back in time, into this juke joint or onto stage with real music legends," Clark concludes. Honeydripper opens in New York and Los Angeles next weekend, with Austin scheduled for early 2008, but those wanting a sneak preview can watch Clark in action this Saturday at Antone's with James Bullard.

Harp magazine recently heralded Future Clouds & Radar as the best Debut/New Artist of the year, charting the Austin outfit's eponymous double album at No. 4 in its annual best-of list. With good reason, too: The Beatles-esque 27-song, 2-CD collection is a kaleidoscope of playfully experimental pop, rich with dreamlike detail and expansive horn arrangements. "The double record is a challenge, a real commitment for all parties involved," says principal songwriter and former Cotton Mather guitarist Robert Harrison (pictured). "After taking a sojourn for a few years, I felt a renewed sense of freedom and celebration with music. This was a body of work that kind of revealed itself in one swoop." Released on Harrison's Star Apple Kingdom label, the discs debut in Europe in March, complete with a few additional live and acoustic tunes and videos. FC&R headline Stubb's on Saturday. "The band is more of a creative community than anything else," Harrison muses. "There's an innocence to the experience that recalls a time when music was less about commodity and more about the actual process of discovery."

Our Life is Not a Movie or Maybe

Last week, Okkervil River digitally debuted its Golden Opportunities Mixtape, a marvelous live, nine-song covers collection that serves as musical annotation to its poignant pop masterpiece, this year's The Stage Names, complete with principal songwriter Will Sheff's personal translation of Serge Gainsbourg's "I Came Here to Say I'm Going Away." "I've always been fascinated with the idea of authorship and identity," relates Sheff. "The way I write and sing is kind of character-based, trying to put myself in a different frame of mind than my own. Even in these love songs written by women, I'm trying to retain their point of view." The Black Sheep Boys are returning to Austin soon to record an official appendix to The Stage Names with producer Brian Beattie. See austinchronicle.com/earache for the rest of the interview with Sheff.

Following a few less-than-positive progress reports from the Chronicle Music staff after Duran Duran's sold-out show last week, OTR stopped off at the Austin Music Hall on Friday night for the Toadies, who stomped through a blistering set that encapsulated 1990s alternative rock in Texas. The current cause for concern isn't the venue's incompletion but rather more pressing issues like the lack of visibility on the mezzanine level. On the ground floor, meanwhile, the overhang from the second level and the air-conditioning ducts attached to its underside not only create a claustrophobic view in the bottom corners of the hall, but they make it difficult for sound to properly enter the area, registering only the low-end frequencies. "We're still in the process of figuring things out," assures Direct Events' Emily Smith. "We're planning to install risers on the second floor and delay speakers in the back of the venue." With any luck, both will be in place for the Pink Floyd Laser Light Show, Friday, Jan. 11.

Return of the Art form

To borrow a line from Jay-Z, local rhyme-sayer Tee Double is not a businessman; he's a business, man. From his Northeast Austin home, the 34-year-old hip-hop entrepreneur runs Kinetic Global, an independent studio, label, and a CD/DVD duplication service that's pressed 13 albums in almost as many years. "I'm trying to develop a business model for other hip-hop artists to follow," says Double, born Terrany Johnson, who estimates a total of 80,000 units pushed to date. "This way I can control every step of the operation." Along with licensing music to next year's The Night Watchman, a film starring Keanu Reeves and Common, as well as MTV's Friday: The Animated Series, the veteran beatsmith/producer is working on a single with Ursula 1000 for Thievery Corporation's Eighteenth Street Lounge Music and an instrumental album, Acrobeatics. "You have to know how to brand yourself," Johnson concludes, "and get out there and hustle."

• This just in: Lou Reed has been named South by Southwest Music Festival keynote speaker for 2008. The iconic Transformer and former Velvet Underground frontman will appear at the Austin Convention Center on March 13 in concurrence with the screening of Lou Reed's Berlin, a recently filmed concert video directed by Texas-raised filmmaker Julian Schnabel. Also confirmed for conversations at the 22nd annual event are composer Steve Reich and Sonic Youth's Thurston Moore.

• Need a few last-minute gifts? Wasted Talent Records has deluxe editions of the Judy's Washarama and Moo available for the first time on CD, expanded to include The Wonderful World of Appliances EP and David Bean's solo venture, Modomusic, respectively.

• The Chronicle Music staff is giving away a 30-plus seasonal CD bundle to the first person e-mailing the correct answer to the following question: In Saturday Night Live's infamous "A Roy Orbison Christmas" sketch from 1985, what actor portrayed the "Big O"? E-mail apowell@austinchronicle.com.